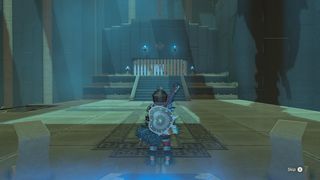 The interior of the Kamia Omuna Shrine

Rudania's Emblem
The Kamia Omuna Shrine,[1] designated by the Trial name Moving Targets,[1] is an Ancient Shrine in Breath of the Wild. It is exclusive to The Champions' Ballad DLC Pack.

The Kamia Omuna Shrine is found on the northern shore of Lake Darman in Eldin Canyon. It's accessed as part of the Main Quest, "EX Champion Daruk's Song". To access the Shrine, Link must defeat the Igneo Talus Titan that lies in the Lake's lava.

After defeating it, the Kamia Omuna Shrine will rise from beneath the ground nearby. Upon entering the Shrine, Link is offered the trial by the Monk Kamia Omuna.[2]

The Shrine features a straightforward walkway that leads to the Monk Kamia Omuna, which is barricaded by a pair of gates. Along the walkway are glowing targets on the walls accompanied by a cannon each. These cannons are operated by a Switch, which moves them when struck, and are fired by placing a Remote Bomb inside and detonating it, releasing an Ancient Orb into the air. The object is to strike the target as the cannon moves, and in doing so unlock a second target and finally the gates themselves.

The first cannon features an immobile target on the wall. Upon striking this target, the wall lowers and reveals a second target. This target moves up and down, requiring more precise timing to strike. Striking this target lowers the first gate, leading to the next area and cannon. Beside the first cannon is a narrow walkway leading to a cage, with a Treasure Chest sitting on a wooden board high above it. The board can be broken by firing the cannon at it. The fallen Chest, which contains a Diamond, can then be pulled out of the cage using Magnesis.

The next cannon features a suspended structure with the next target mounted on it. This structure's angle can be manipulated by using the nearby gyroscopic device. The structure is to be tilted in such a way that the target is in clear range, allowing Link to strike it with the cannon. In doing so, the wall behind the structure opens, revealing another target. As this target lies behind the structure, it must be tilted again so that the second target is within range. Striking this target opens the final gate to the Monk.

At the end of the Shrine, Link meets the Monk Kamia Omuna, who commends his resourcefulness and rewards him with Rudania's Emblem.[3] The Monk then tells Link to collect all three of Rudania's Emblems to reveal a new challenge.[4]