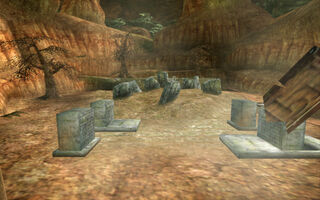 In Ocarina of Time, the graveyard lies behind Kakariko Village. During young Link's time, the gravekeeper Dampé oversees the graveyard at night to promote his Heart-Pounding Gravedigging Tour mini-game, while in the daytime, a little kid roams around the graves instead.[4] While Dampé is not out patrolling, he is sleeping inside his hut, which is located in the east corner of the graveyard. Within it Link can find the Gravekeeper's Diary, which talks about a treasure that he found while digging around.[5]

Poes of many fallen Hyruleans, Royal Family members, and the Sheikah tribe who founded Kakariko rest in the graveyard, and it is said that the latter watch over the spirits in their eternal slumber.[6] The gravestones that have flowers in front of them can be pulled back to reveal a secret room or underground chamber. These often contain a chest with a few Rupees, and one contains a chest with a Hylian Shield.

At the back of the graveyard rests the two famous Composer Brothers: Flat and Sharp, whose tombstones are separated by the Royal Family's Tomb. This tomb, which can only be opened by playing "Zelda's Lullaby" on the Ocarina, houses the Composer Brothers' "Sun's Song" as well as a poem to go along with said melody.[7]

After Link becomes an adult, he returns to the graveyard only to discover that Dampé has passed away. Link reads the gravekeeper's diary inside his hut, which beckons anyone who reads the text to come to his grave to receive the treasure he found seven years ago.[8] The young hero can uncover Dampé's grave on the west side of the graveyard to race the deceased gravekeeper and receive the Hookshot from him.

Even farther back, in a ledge high above the graveyard, is a small, concealed room with several torches and a sealed door decorated with the Sheikah symbol. Link can only access this chamber once he has learned the "Nocturne of Shadow" from Sheik. By using Din's Fire in the middle of the room, the torches will light up, opening the sealed door and granting access to the Shadow Temple.

In Twilight Princess, the graveyard is also located behind Kakariko Village, accessed by entering the gate behind Renado's Sanctuary. At first sight, the graveyard seems smaller than its Ocarina of Time counterpart; however, in the northern portion of the graveyard is a small opening leading into a wide open area with a small pond. At the end of the pond is a small patch of land where the King Zora is buried. According to Rutela, the Kakariko Graveyard is also where various members of the Zora race take their eternal rest.[9]

The entrance to King Zora's tomb is sealed off by a stone bearing the Zora Emblem when Link first visits the graveyard. Once Link takes the mortally-injured Ralis to Kakariko Village, Queen Rutela appears to him as a ghost just outside of Renado's house. She beckons him to follow her to her husband's grave, where she thanks him for saving her son in his time of need.[10] As she had already promised Link, Queen Rutela bestows the Zora Armor upon the young hero, which he needs in order to enter the Lakebed Temple.[11][12] Queen Rutela then joins the King Zora in his eternal slumber.[13]

Later on in the game, after Link receives Ashei's Sketch, he returns to King Zora's tombstone and shows the sketch to Prince Ralis, who had been praying for his mother.[14] Prince Ralis recognizes the Reekfish on the drawing and gives Link the Coral Earring, the item necessary to catch a Reekfish in Zora's Domain needed to proceed to Snowpeak.[15]

The graveyard is home to two Poe Souls as well as a female Golden ant.[16] It also houses a one-way shortcut to Lake Hylia, which must be opened with Water Bombs.

In Breath of the Wild, the graveyard is found if Link follows a path in the village. Koko’s mother can be found here.