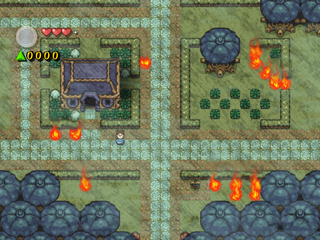 Kakariko Village is a Stage in Four Swords Adventures.[1] It is the second stage in The Dark World Level.

While searching for the Dark Mirror in an area now known as The Dark World, the Links come across Kakariko Village, which has also been covered in the extension of darkness that has shrouded northwestern Hyrule. The darkness in turn has caused a state of anarchy,[2] and the village now overrun by mad thieves. In addition to that, Shadow Links have furthered the chaos by starting fires around the village, which the townsfolk suspect the Links of doing.[3] The owl, Kaepora Gaebora, leaves the Links to search for the mirror in the ruined village while he watches the rest of Hyrule from the skies.

Upon their arrival, the four Links are required to capture the thieves who have hidden themselves around the village and throw them into a fence in the northern part of the village, which was built by an Old Man to prevent them from escaping.[4] Only by capturing them all can the Links be permitted to leave the village. After helping another Old Man by giving him a Cucco to console the passing of his wife, the Links receive a Power Bracelet, and use it to uncover the hidden hideouts of the remaining thieves. Once they have all been imprisoned, the Links are allowed north of the village, to a place where they can summon rain through a prayer, thus quelling the many fires started by the Shadow Links. Although while the resulting downpour extinguishes the town's flames, it is observed that the rain is unusually heavy.

With the village's fires extinguished, the Links are able to access neighboring areas that were previously blocked. To the northwest of the village lies a pond which houses the rather large Hungry Zora, who asks the four Links to help feed him fish in an optional mini game, rewarding in a big green Force Gem and a Heart Container.[5] East of the village is a stream that leads to a dark temple,[6] but on their way to investigate, the Links battle with several Shadow Links using Bombs, some of which have hidden themselves in underground pits.

After swimming through the stream outside the town, the Links arrive to a clearing where they encounter and fight Soldiers and the boss Big Dark Stalfos. In defeating it, they rescue the second of the four Knights of Hyrule and recover the Green Royal Jewel. The Links then head towards the direction of the Temple of Darkness.