"They say that the owl named Kaepora Gaebora is the reincarnation of an ancient sage."
— Gossip Stone

Kaepora Gaebora is a recurring character in The Legend of Zelda series. He is a wise old owl that assists Link throughout his adventures. He can rotate his head in the owl-like fashion, as one would expect, but when he does so, his markings resemble another face looking down at Link. He is portrayed as very wise, perhaps knowing more than he reveals.

Kaepora Gaebora gives Link advice throughout his childhood, giving Link the option to hear his advice again afterwards. He can also be seen when Link is an adult when he learns the "Requiem of Spirit" from Sheik at the Desert Colossus. One of the Gossip Stones in the game (specifically in the Sacred Forest Meadow) says that Kaepora Gaebora is the reincarnation of an Ancient Sage.

On Death Mountain and Lake Hylia, Kaepora Gaebora will offer to carry Link to Kakariko Village (dropping him on the roof of Impa's House) and Hyrule Field (in front of the drawbridge leading to Hyrule Castle Town) respectively.

According to the book Hyrule Historia, Rauru followed Link's adventures before Link drew the Master Sword as the owl Kaepora Gaebora. He also appears after Link has pulled the sword. Taken literally this means that Kaepora Gaebora can exist independently from Rauru, only possessed by him until a certain time. However, this statement may also merely be a mistake on the part of the writers, intended to mean that Kaepora Gaebora is always a form of Rauru.

The owl, who is unnamed in this game (although it should be noted that Arts and Artifacts refers to him as Kaepora Gaebora), first appears in the Southern Swamp, when Link is traveling to Woodfall by way of a shortcut. The owl teaches Link the "Song of Soaring", an optional song which allows him to warp to activated Owl Statues, which the owl has scattered throughout Termina to aid the one who can change the fate of the land. He appears again in Goron Village, helping Link to find the Lens of Truth, which is essential for obtaining the Goron Mask. The owl is apparently able to retain his memory even after Link resets time to the Dawn of the First Day; he will recognize Link in Goron Village even if time has been looped since their meeting in Woodfall; also, once he has aided Link he will not be seen again at either of the locations he had been waiting at during previous loops. This ability is hinted at when he tells Link "From the first time you play this song, we shall become eternal friends, transcending time and place!", and may also explain why the Owl Statues he placed are able to remain activated even after time has been looped.

The four Links are often guided by Kaepora Gaebora. He is the one who wakes them after they are sent away by Vaati. Kaepora Gaebora often appears at the beginning of levels.

Kaepora Gaebora helps Link by translating the Ancient Hylian script carved into the wall which contained the Portal of Doom. When Link is later dragged underwater by an Octorok while swimming unarmed in Zora's River, Kaepora Gaebora drops him his sword. He then offers Link a ride, which Link accepts, hanging onto his talons as they fly to Kakariko Village. At the end of the story, Kaepora Gaebora is part of the team who swear to protect Hyrule together, along with Link, Navi, Zelda and Impa. 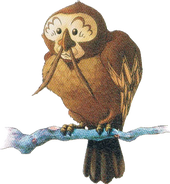 Retrieved from "https://zelda.fandom.com/wiki/Kaepora_Gaebora?oldid=543513"
Community content is available under CC-BY-SA unless otherwise noted.