Zelda Wiki
Register
Don't have an account?
Sign In
Advertisement
in: Sword Techniques, Abilities, Abilities in Ocarina of Time,
and 17 more

Not to be confused with the Jump Strike, a similar attack in Twilight Princess. 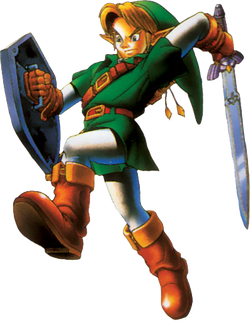 Artwork of Link performing a Jump Attack from Ocarina of Time

Link performs the Jump Slash by leaping forward into the air, then bringing down his Sword towards the enemy. In all cases of this move's appearance, it deals twice the damage of a regular sword strike.[7][8][9]

The technique is effective against most enemies, but some foes, such as Darknuts in Twilight Princess, are able to dodge or counter it if not timed correctly. Moreover, for a short while after Link performs a Jump Slash, he is vulnerable to enemy attacks.[9][10]

To perform this attack in any the 3D Zelda games, Link must have his Sword drawn, and he must be targeting the enemy.[8][11][12] When both conditions are met, a simple press of the action button will unleash a Jump Attack.

In Four Swords Adventures, the Jump Attack can be performed by "tapping" the control stick of a GameCube controller, or D-Pad of a connected Game Boy Advance, and simultaneously pressing the sword button. It is much harder to pull off than in other incarnations, but serves less of a purpose now, as the Roll Attack is better at dealing damage from a distance, and multiple regular strikes up close are comparatively equal in dealing damage up close.

Link performs the Jump Attack in Twilight Princess with only one hand instead of two, and this time around less enemies are affected by it. While in mid-air, if the player moves the Control Stick in a circle, Link will do a Spin Attack upon landing.

The Targeted Attack can be performed by tapping on an enemy with the Stylus, but only while Link is distant from his target.[5] At closer range, Link will do a more modest Sword thrust instead.

The Targeted Attack can be performed by tapping on an enemy with the Stylus, but only while Link is distant from his target.[6] At closer range, Link will do a more modest Sword thrust instead. Dark Link is also able to perform this move; however, he jumps much higher and more slowly than Link does.

In Skyward Sword, Jump Attacks are one of Link's Special Sword Strikes. They can be performed by Z-Targeting, jumping forward and then shaking the Wii Remote. The Jump Attack in Skyward Sword does the same amount of damage than a normal slash.

In Breath of the Wild, Link must jump manually with the

button and then attack with the

button to execute a Jump Slash. Its execution varies slightly depending on the weapon used, but it always deals double the amount of damage and creates a small shock-wave upon impact.

The Running Hack is one of Link's moves in Soulcalibur II. The young hero can perform it by running up to the enemy and then pressing the vertical attack button. It can deal up to 42 HP worth of damage and is considered to be a mid-attack.

Link can perform a Jump Attack in Super Smash Bros. for Nintendo 3DS / Wii U. It serves as his dash attack, which is executed by running and pressing the attack button.