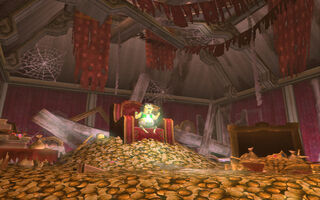 Located on the south road of Hyrule Castle Town, it is home to Jovani, a man who has lost his soul due to his greed and is now made entirely of gold, thus unable to move any longer.[2] The house is rather small and is full of gold and other treasures; however, it cannot be entered normally since the door is locked. Instead, Link must either access it through Telma's Bar or by digging in front of the door as a wolf.

Link first enters Jovani's House as he is trying to take Midna to Princess Zelda via the Castle Town Sewers. As a wolf, he traverses through Telma's Bar and eventually reaches the inside of Jovani's House, where he must defeat a Poe and collect its soul. Upon obtaining its soul, Jovani will regain the ability to speak and asks Link if he could collect 20 Poe Souls for him in order to break the curse.[3] Afterwards, Jovani opens a Treasure Chest, which leads to the underground waterway of Hyrule Castle.[4]

When Link collects 20 Poe Souls and shows them to Jovani, he will be able to move again and will reward the hero with a Bottle filled with Great Fairy's Tears.[5] In Twilight Princess HD, he also gives Link the Ghost Lantern.[6] However, since 20 Poe Souls are not enough to break the curse, Link must collect all 60 Poe Souls, at which point Jovani returns to his normal self.[7] He then leaves his house to drown his sorrows at Telma's Bar since his girlfriend found another lover.[8] At this point, Link can go back to Jovani's House and talk to Gengle, Jovani's cat, to receive unlimited silver Rupees for saving their lives.[9]