Zelda Wiki
Register
Don't have an account?
Sign In
Advertisement
in: Swordsmen, Bosses, Bosses in The Adventure of Link
English 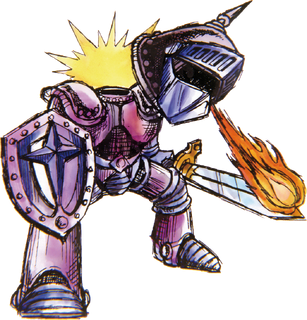 Jermafenser,(TAoL | CN)[1] also known as Helmethead,(TAoL)[1] is the boss of Midoro Palace in The Adventure of Link. It reappears as the boss of the Palace on the Sea in the original Family Computer Disk System version of that game; in the NES version, it was replaced with Gooma.

Like Mazura, the previous boss, Jermafenser's weak point is his head. Unlike Mazura, he attacks Link by throwing fireballs at him from his head. When Link lands a blow to the head, the helmet will come off and be replaced by another one. The detached helmet will then begin to float around and attempt to kill Link by shooting more fireballs and running into him. When Link knocks off two helmets, his true head will rise from the armor - a white head (seemingly with one eye). For the rest of the battle, Link fights Jermafenser while also dodging the fireballs shot by the helmets. After achieving victory in the fight, Link returns one of the Crystals to the Palace.

Jermafenser makes a brief appearance in "Having a Ball" in Captain N: The Game Master. At the end of the episode, Jermafenser stands tall behind the throne at King Hippo and Eggplant Wizard's party in the tower, fanning King Hippo, while Moblins play music in the background. When Link, Kevin and Princess Lana retrieve the Triforce pieces from Eggplant Wizard and King Hippo and use all three against them, Jermafenser is destroyed along with the Moblins.