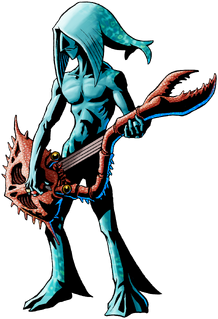 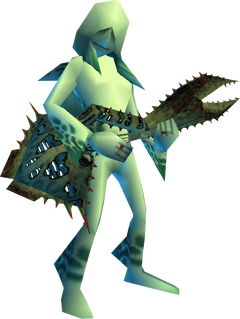 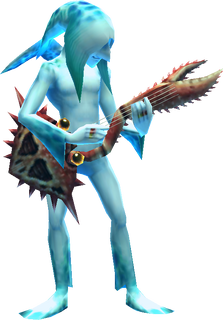 Japas is a character in Majora's Mask.[1]

Japas is the bass player of the Zora band, The Indigo-Go's.[2] He and Mikau, the guitarist, like to write and compose their own music, but Evan, the bandleader and songwriter, always condemns them for doing so.[3][4] If Zora Link reads Mikau's Diary, he will learn a new riff written by them. He can then play it in a Jam Session with Japas, who will complete the song.[5] If Link plays the full song for Evan, he will receive a Piece of Heart. This is the same song that is played during the band's rehearsal and their eventual performance at the Carnival of Time.[6]

Japas plays the dungeon theme from The Legend of Zelda on his bass upon entering his room. He is last seen during the ending credits where he and the rest of the band members are performing at the Milk Bar for the Carnival of Time.