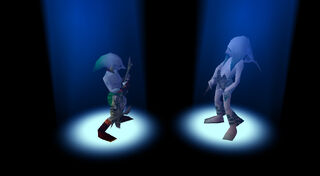 Zora Link and Japas having a Jam Session

Zora Hall
The Jam Session is an event in Majora's Mask that takes place in Zora Hall.

If Link reads the Diary in Mikau and Tijo's room while wearing the Zora Mask, he can read what notes Mikau played on his guitar during previous Jam Sessions with band's bassist, Japas.[1][2] Afterwards, Link can enter Japas's room disguised as Mikau and initiate a Jam Session by showing him the Zora Guitar.[3] Japas and Link take turns playing strings of four notes each, and if Link plays the notes taken from Mikau's diary correctly a short cutscene ensues in which some of the band's fans gather outside the room to listen.

When Japas and Mikau's notes combine, they create the following 16 note song:

The song is a success, but Japas knows the bandleader and songwriter, Evan, would resent that they were writing songs behind his back if they tried to show it to him.[4] True to form, Evan will reject the song if Link plays it for him while disguised as Mikau,[5] but if Link plays the song for Evan as himself, Evan will use it and even announce his intentions to play it at the Carnival of Time, and give him a Piece of Heart in return.[6]

After Link defeats the evil in the Great Bay Temple and the singer, Lulu, recovers her voice, he can participate in the Band Rehearsal, where Evan will showcase his new composition. If Link talks to Japas afterwards, he'll wonder how Evan came up with a song so similar to their own.[7]

The song is heard for the last time during the ending credits where the band plays at Latte in Clock Town.