Not to be confused with the Big Poe, a similar boss in Four Swords Adventures. 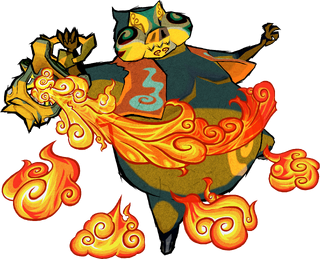 Protector of the Seal[1]

Mirror Shield
Power Bracelets
The Poes that make up its body

Jalhalla is the leader of all Poes who appears as a Boss in The Wind Waker.[2] He is composed of many smaller Poes.

Jalhalla resides in the core of the Earth Temple and is responsible for the death of the Earth Sage, Laruto.[3] He owes his existence to a small group of about fifteen normal Poes, and a mask that uses their power to form the entity. This beast must be defeated in order to partially restore power to the Master Sword, by placing Medli in her new position as the Earth Sage.

When Link enters the deepest room of the temple, he finds several Poes running about. Suddenly aware of Link's presence, they all turn towards him. They then jump into a mask in the center of the room to form Jalhalla. The battle thus begins.

Jalhalla employs a variety of attacks in the battle. His most common move involves scattering fireballs from his lantern. He can also forcefully blow out air, enough to push Link toward the spiked wall, or suck in air and breathe fire. Touching Jalhalla causes Link to become confused, making him move in the opposite direction of his intended course. During this time, an image of Jalhalla's mask rotates over his head and he appears dizzy. Confusion lasts for approximately five seconds but can be quickly removed by taking damage.

The trick to bringing Jalhalla down is to direct light at him with the Mirror Shield, causing him to materialize and fall. Link must then lift the giant off the floor with the Power Bracelets and throw him into one of the purple columns of spikes on the walls. This will cause his body to split into many Poes for the young hero to dispose of. Link can use the Hurricane Spin technique to make this task easier if he has already learned it. However, only five Poes can be killed at any time. Link repeats this process to destroy all the Poes to defeat Jalhalla. The boss's mask then appears, dumbfounded that there are no more Poes to use. When he tries to escape, a beam of light solidifies him and causes him to fall to the ground and shatter. Defeating the boss yields a Heart Container and allows Medli to take her place as the Sage of Earth, restoring some of the Master Sword's lost power.

Jalhalla is found again in Ganon's Tower later in the game. He must be defeated for a second time in the same fashion to break the seal to the door leading to Ganondorf.

Jalhalla's name may be a play on "Valhalla", a kind of warrior's heaven in Norse mythology.