Jadusable, more commonly known as Ben Drowned or You Shouldn't Have Done That, is a fan-made alternate reality game (ARG) revolving around a haunted The Legend of Zelda: Majora's Mask game cartridge. Jadusable has rapidly developed a large community with the original "You shouldn't have done that" site having since stopped redirecting to the official forum, which can be found here. Due to the creators of the game being busy with work, it has been on hiatus several different times. 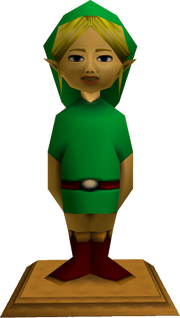 The story starts off with a college sophomore going by the handle "Jadusable" aquiring an odd copy of Majora's Mask from a shady old man at a garage sale. Jadusable soon finds that the game already contains a save file titled BEN. Out of respect for the previous owner, Jadusable leaves it alone, and creates another profile as "Link." The game starts to behave very strangely due to BEN which begins with NPCs referring to the player as "BEN", instead of "Link". Jadusable decides it must be a bug in the game, and deletes the BEN profile, but this results in the NPCs not saying any name at all, only blank spaces.

After performing the Fourth Day Glitch to give himself more time to complete a dungeon, the game takes a much more disturbing turn. Immediately transported to the final boss room, Link is trapped with the Skull Kid who would only float in the center of the room. After being given the option to "Go to the lair of the temple's boss," Jadusable accepts, and Link is transported to Clock Town. A reversed version of the "Song of Healing", dubbed the "Song of Unhealing", is constantly played in the background, and Link is unable to leave the town, as exits only lead him to different districts.

Aside from the iconic "Song of Unhealing" that would play, the statue created from playing the "Elegy of Emptiness" would sometimes relentlessly pursue Link by constantly appearing behind him no matter where he went. The appearance of the statue was common in instances of the game where no other NPCs could be found anywhere in Clock Town, nor Termina at large, leaving only Link and the predatory statue to occupy the entirety of the game's world.

Other times, Jadusable would load his save file to find himself placed in completely different points in the game from when he had previously saved, along with oddly named profiles like "YOURTURN" and "BEN". One of the most notable states was starting at the top of the Clock Tower at the end of the Final Day, during the confrontation with the Skull Kid, only to have Link abruptly die from both electrocution and fire as the Skull Kid continued to chuckle.

Because of these strange occurrences in the game, Jadusable kept a log of the things that happened while he played, and even began recording his playtime and uploading them to YouTube. The events adversely affected Jadusable's well-being as he continued to be tormented by the game both while playing it, and in his dreams.

Jadusable was afraid to play the game for a while, and instead decided that he would go back to the garage sale in which he got the game and find out more about the previous owner, Ben. Unfortunately, upon returning to the home where the shady old man had lived, Jadusable was told by a neighbor that the old man was moving, but he was never married, and never had any children. When asked, the neighbor was reluctant to speak of a boy named Ben, beyond saying that the boy, who had lived in the neighborhood, had died eight years ago in an accident.

Upon Jadusable's return to the game, he was finally given a clue as to Ben's fate when the mysterious save files immediately started with the animation for using the Zora Mask, and placed him on the beach of the Great Bay, where Epona stood, facing off the shore to a spot in the water. Zora Link swam underwater, where he found the "Elegy of Emptiness" statue sitting at the bottom, and promptly drowned, which Zora Link was normally incapable of doing.

After starting up the game the next day, the names of the two saved profiles read "BEN DROWNED". As Jadusable starts one of the files, he finds Link at the beginning of the game, chasing after the Skull Kid through the forest. When given his first opportunity to play the Ocarina, he plays the "Elegy of Emptiness", which transports him to various locations from both Majora's Mask and Ocarina of Time, where signs and NPCs will only respond with, "You shouldn't have done that."

At this point, Jadusable can no longer bear to play the game, and decides to go back home to get away from the paranoia, leaving the last of his notes and videos to be uploaded by his college roommate for others to download. By combing through his notes, it comes to light that Jadusable was staying in a single-person dorm room, and did not have a roommate. This meant that the last document was likely fabricated by BEN, posing as a "roommate", in order to spread to other computers after he had escaped the confines of the game cartridge while Jadusable was capturing his gameplay.

Out of the Game

After Jadusable's last notes and videos were uploaded, strange videos begin appearing on, which seem to be messages from BEN, like the first thanking the player for freeing him, and saying, "Now I'm everywhere." This starts the interactive portion or the ARG where players try to piece together and prevent the malicious BEN's intentions and quite possibly save the world. One of the most prominent ways of advancing the ARG was by players sending BEN video responses through YouTube, usually of Ocarina of Time or Majora's Mask songs being played. Particular responses were a video of the "Song of Time" that sent a website three days into the past, allowing the players access to pages that were either heavily changed or restricted by the time they had gotten there. Another was using a video of a reversed "Song of Time" to slow time in the ARG, allowing more time to solve puzzles.

As players continued to solve BEN's riddles, they uncovered the website of a doomsday cult called the "Moon Children", solving puzzles to gain access to restricted pages and receive information. The cult itself awaits the day when the moon will crash into Earth, and is somehow tied to the systematic removal of fictitious people that have some link to the game. At this point, it was up to players to get into contact with these people, so they could solve the mysteries of BEN and the cult together. One of the site's members and his sister had already disappeared because players couldn't figure out what to do quickly enough, but managed to find the cult's next target, a young man with the handle Kayd Hendricks, who they tracked through his DeviantART profile. Kayd gave the players many clues, but ultimately has gone missing after divulging large amounts of information to help the players.

The ARG has since distanced itself from Majora's Mask itself, especially since it was discovered by the players that Zelda-oriented songs and videos no longer had any affect. The entity known as BEN has been released and is seemingly propagating throughout the internet, challenging the players of the ARG.

The videos of the haunted Majora's Mask itself were in fact captures from a ROM of the game, modified with various cheat codes to achieve the effect of Ben's restless spirit or some malevolent entity playing with Jadusable in the game world. The websites created for the ARG are also obviously fictitious, possessing a multitude of clues for those players with the skills to find them, sometimes down to even knowing web coding, and how to translate binary language.

The real Jadusable, who oversees the ARG, has said that its story runs parallel to the story of Majora's Mask, with a being (Majora/BEN) that is trapped in an object (mask/video game) wanting to be set free, and a world-ending event that involves the moon. Players surmised that the in-game Jadusable was akin to the Skull Kid, who is unwilling pulled into events that could lead to the world's demise.

Retrieved from "https://zelda.fandom.com/wiki/Jadusable?oldid=428570"
Community content is available under CC-BY-SA unless otherwise noted.