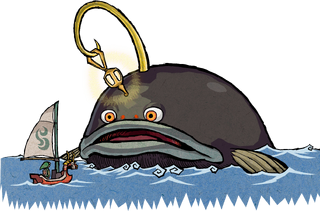 Jabun is a major character in The Wind Waker.[3] He is thought to be a descendant of Lord Jabu-Jabu.[4]

Jabun is a giant fish known as the Water Spirit who used to live at Greatfish Isle. Ganondorf went to his island to destroy it and kill Jabun, but Jabun sensed him coming and fled to a cave hidden in Outset Island.[2] He can only speak Ancient Hylian. Knowing of his whereabouts and seeking the third pearl, the King of Red Lions and Link sailed to his new home. Although Jabun at first hesitated to hand over Nayru's Pearl to one who had no connection to the Hero of Time, the Water Spirit relented and gave the final pearl to Link, leaving it up to the gods to test the true courage of the young hero.[5] [6][7]

Since Jabun only speaks Ancient Hylian, Link is not able to understand him. Jabun even calls the King of Red Lions by his title of King Daphnes Nohansen Hyrule, but Link is unaware of this statement.[8]