Isle of the Dead

The Isle of the Dead is a location from The Legend of Zelda: Phantom Hourglass. An island, it is located in the northeastern section of the World of the Ocean King. On the island can be found the tomb of one of the Four Knights of the Cobble Kingdom, Brant; its only other inhabitants are the spirit of an adventurer named McNey, as well as several Stalfos and Rupee Likes.

When Link arrives on the Isle of the Dead, he is tasked with finding the Regal Necklace needed to dock on the Isle of Ruins. After traversing the rugged terrain of the island, Link eventually arrives at a Graveyard where six sages are buried. The inscriptions on the sages' tombstones indicate the path that must be traveled in the Phantom Corridor where Brant's tomb is located.

After reaching the Phantom Corridor, Link proceeds onward, while following the directions given by the sages' graves. Inside, he encounters a dead adventurer named McNey, who once was in Link's shoes. He attempted to recover the Pure Metal, Aquanine from the ruins of the Cobble Kingdom, but got lost in the Phantom Corridor, and eventually perished. McNey warns Link to solve the sages' riddle, or he too will suffer the same fate.

Once Link successfully navigates his way through the temple and reaches Brant's tomb, the ghost hands over the Regal Necklace, allowing the hero to dispel the high velocity winds surrounding the Isle of Ruins. 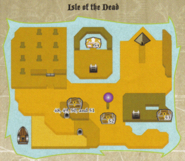 A map of the Isle of the Dead
Add a photo to this gallery
Retrieved from "https://zelda.fandom.com/wiki/Isle_of_the_Dead?oldid=425254"
Community content is available under CC-BY-SA unless otherwise noted.