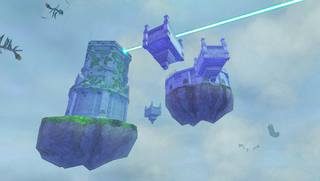 The Isle of Songs consists of two islands. The building on the main island can only be entered through a small crawlspace. To access the crawlspace, Link must solve a puzzle on the second island in which he must rotate three pieces of a bridge that move in tandem, synchronizing them using stone blocks that he can activate using his sword on a switch panel.

Within, Link can learn Farore's Courage, Nayru's Wisdom, and Din's Power. Each song, when played on the Goddess's Harp, can summon Trial Gates to the Silent Realm, where Link can demonstrate his spiritual growth and earn powerful items that open the way to the areas in which the Sacred Flames are hidden.

Also, two Goddess Cube Chests are located on the Isle of Songs.

After being told by Impa that the Goddess Sword is not capable of activating the Gate of Time inside the Sealed Temple[2], Link learns that he must enhance his sword by bathing it in the three Sacred Flames[3], requiring that he completes the three Silent Realms. To enter said realms, he must learn four sacred songs. Impa tells Link that in order to enhance his sword, he must travel to the Isle of Songs and teaches him to play the Ballad of the Goddess on his newly acquired Goddess's Harp[4].

As the Isle of Songs is located within the Thunderhead and thus cannot be reached directly, Link plays the Ballad of the Goddess on top of the Light Tower, which activates a beam, creating an entrance to the storm cloud. Link's path at the Isle is blocked by a puzzle, which after successfully completing, he is granted access to the entrance of the building on the neighboring island. After going inside and activating a switch with his sword, a statue pops up and music starts playing. Fi suddenly remembers words from Hylia, telling Link what he must do next. The background music becomes louder and Fi starts dancing, teaching Link Farore's Courage. The song leads Link to a gate of the first Silent Realm.

Further on, after obtaining the Sacred Flame, Link will also learn Nayru's Wisdom and Din's Power, both leading to separate trials. After learning all the songs, Link is no longer required to travel to the Isle in the future. Even though the Isle of Songs has served its purpose, it remains available at all times.