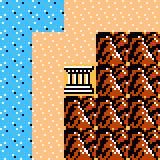 Island Palace guide
at StrategyWiki
The Island Palace is a recurring dungeon in The Legend of Zelda series.[1][2]

Despite its early appearance in The Adventure of Link, the Island Palace is one of the most difficult to find. It's located on an island southeast from the Harbor Town of Mido, but it can't be accessed directly; Link needs to cross an underground cavern placed south from King's Tomb, and the only hint suggesting this comes from Error from the Town of Ruto (in addition, he won't tell Link about this at first). Even if Link knows how to reach the island, he still needs to learn the Fairy Spell in order to take the path properly.

It is the only architecture found in the southeast isle. It is made of red bricks and is inhabited by many Iron Knuckles of varying calibre as well as other enemies, notably a Moa. The palace has the unique property of having an exterior room aside from the usual entrance, wherein the main item, the Raft, can be found. This item is useful for travel overseas to the Eastern region of Hyrule. Deep within the palace, Link finds and defeats Rebonack, a powerful blue Iron Knuckle mounted on a floating mechanical horse and wielding a jousting lance.

As an indicator of the increased difficulty, the Iron Knuckle statue at the entrance to the palace will either yield a red Magic Jar or possibly a red Iron Knuckle. Previously, the statues in the last two palaces would always contain a red Magic Jar.

The Island Palace is visited in two episodes of Captain N: The Game Master. In "Quest for the Potion of Power", the Island Palace is the location of the Potion of Power. However, the golden door leading to the potion's chamber can only be opened with the Golden Key.[3] When Link, Princess Zelda, and Kevin arrive to the room holding the Potion of Power, they are confronted by an Iron Knuckle riding a horse, who reveals to the be guardian of the potion.[4] While Link and Kevin are arguing on how to defeat the Iron Knuckle, King Hippo and Eggplant Wizard steal the Potion of Power and promptly escape the palace.[5] However, before the heroes have a chance to stop them, the Iron Knuckle grabs Zelda, and Link realizes that he must fight alongside Kevin to be able to defeat the armored foe.[6] Together, Link and Kevin fire at the Iron Knuckle, causing its horse to disappear and giving Zelda a chance to free herself. The three heroes then shoot at the Iron Knuckle one more time to finally defeat it, allowing them to exit the palace and follow King Hippo and Eggplant Wizard.

In "Having a Ball", the Island Palace is once again visited as Link, Zelda, Kevin, and Princess Lana are after King Hippo and Eggplant Wizard, who have stolen the Triforce of Power and Courage. When the heroes finally find them, they discover the minions are having a party in one of the palace's towers. With the help of Kevin, Link and Zelda successfully retrieve the two remaining Triforce pieces from the foes.