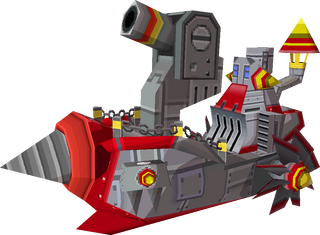 The full Iron Ship, as seen in Phantom Hourglass

Phantom Hourglass
Transportation
Hyrule Warriors Legends
Raising the amount of time that can be lost before lowering in battle rank.[1]

Steel Train
Iron Ship are recurring Items in The Legend of Zelda series.[2][1][note 1]

In Phantom Hourglass, the Iron Ship is the name given to the SS Linebeck once it has been outfitted with the following Ship Parts:

The Ship Parts can be attached to the SS Linebeck at any time by visiting the Shipyard on Molida Island. For every three parts of the Iron Ship used, the durability of the SS Linebeck is increased by one Heart. When all eight parts are used together, they increase its durability by three Hearts, up to a total of seven Hearts. Aside from this boost in durability, the Iron Ship is merely a change in appearance to suit the player's personal tastes.

Iron Ships can be traded for a random delicious-type Food at the Linebeck Trading Company.[6] While searching a map space with the Linebeck Trading Company, any Item Card can be traded by selecting it.[7] After a single trade, the company will disappear from the space.[8] During a Two-for-One Sale, two delicious Food will be given instead of just one.[9]