Zelda Wiki
Register
Don't have an account?
Sign In
Advertisement
in: The Wand of Gamelon Pages with Invalid or Missing Terms, Ikana, Bosses,
and 8 more
English

This page is about the Boss named "Iron Knuckle". For the enemy of the same name, see Iron Knuckle. Also not to be confused with Rebonack, the Iron Knuckle Boss in The Adventure of Link. 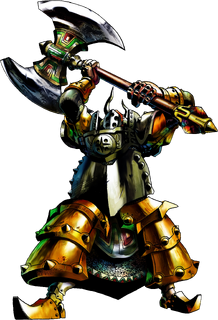 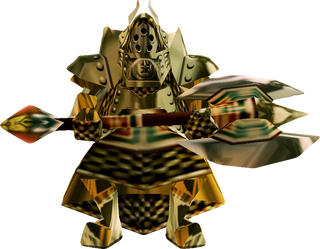 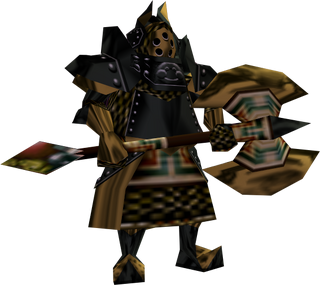 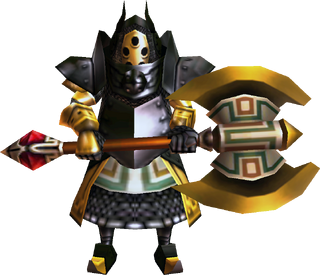 Iron Knuckles are recurring Sub-Bosses in The Legend of Zelda series.[1]

Iron Knuckles are large, heavily armored knights, equipped with huge axes capable of dealing 4 Hearts of damage to Link, making them among the most dangerous enemies in the Zelda series. Iron Knuckles wear a cloth tunic bearing Gerudo symbols in both Ocarina of Time and Majora's Mask. Though quite similar to Darknuts, Iron Knuckles are less common across the series, and usually play the role of stoic guardians as opposed to the more aggressive behavior of a Darknut. The main difference, however, is that they do not share a Darknut's traditional weakness to attacks from behind. These foes are dueling elites, incorporating much of the same swordplay techniques that Link does during battle to great effect. These knights are also known for their unmatched defensive capabilities and long vitality. Their armor allows them to take many hits, but their slow attacks leave them open to retaliation.[2] The armor of Iron Knuckles can be damaged and removed with Sword swings, Bombs, Bombchus, or the Megaton Hammer. Once part of their armor is removed, they become enraged and move quicker, but are then weak to Arrows, opening up the opportunity long-range attacks.

An Iron Knuckle also appears in the Fire Temple and the Gerudo Training Ground in Master Quest.

Three Iron Knuckles appear in Majora's Mask. Two of them are found within tombs of the Ikana Graveyard, with one on the First Day and one on the Second Day. One is guarding the resting place of Flat and the other is guarding a Piece of Heart. The third Iron Knuckle can be found in the Link Dungeon inside the Moon during the hide-and-seek game played by Link while in his normal Hylian form. They are more aggressive than they are in Ocarina of Time.

An Iron Knuckle appears as the second Boss. He is located in Tykogi Tower, where he had imprisoned the residents of Sakado, including Mayor Cravendish and Harbanno the baker.[5] After freeing Harbanno, Princess Zelda confronts the Iron Knuckle atop the Tower. Upon his defeat, he breaks apart and reveals a beating Life Heart. Two Armos witness his death and quickly decide to leave. Princess Zelda then rescues Mayor Cravendish shortly after. The Iron Knuckle's sole weakness is to the Power Glove, which defeats him in a single strike.

An Iron Knuckle appears as one of Ganondorf's minions after Stalllord the Stalfos reports to the King of Evil that Link has the Master Sword. Later, it tries to execute Ingo for failing to give Epona, but he is brainwashed by the Twinrova witches instead.