Zelda Wiki
Register
Don't have an account?
Sign In
Advertisement
in: Enemies, Characters, Enemies in The Adventure of Link,
and 3 more

This page is about the enemy named "Iron Knuckle". For the Boss of the same name, see Iron Knuckle (Boss). 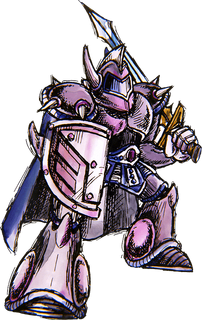 The Adventure of Link
Ocarina of Time
Majora's Mask

Magical Sword
Iron Knuckles are recurring Enemies in The Legend of Zelda series.[1][note 1]

A blue Iron Knuckle known as Rebonack appears as the Boss of the Island Palace and as mini-bosses in the Three-Eye Rock Palace. Rebonack is also known as "The Guardian Ironknuckle."[6] When Rebonack has taken a certain amount of damage, he will dismount the mechanical horse that he rides and fight as a regular blue Iron Knuckle.

In the original Famicom Disk System version of the game, blue Iron Knuckles' knives flash and disappear when blocked, but in the updated NES version, they do not flash and instead bounce off of Link's Shield.

Iron Knuckles make appearances as enemies in Cadence of Hyrule where they move to the beat of the music. They move on every fourth beat, crouching on the third beat before jumping onto an adjacent tile, harming any who might be standing in the way. If Cadence, Link, Yves, or Zelda is unfortunate enough to stand directly in front of them, they will attack by punching them with what seems to be brass knuckles on their hands. Their thick armor protects them from most attacks, forcing the heroes to either attack them from behind where they are exposed, or use items that can pierce their armor such as Bombs, Bombchus, arrows fired from the Great Bow, the legendary Fragarach sword, or use any Weapon while the Ring of Piercing is equipped.