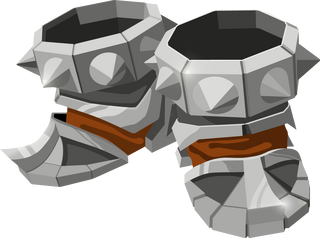 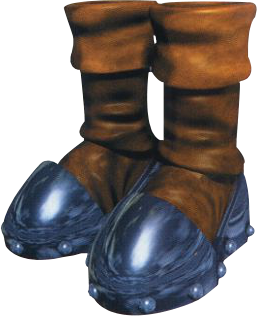 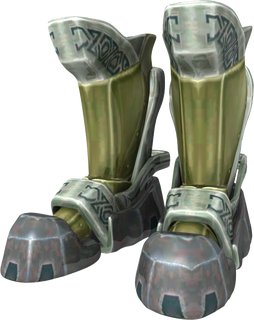 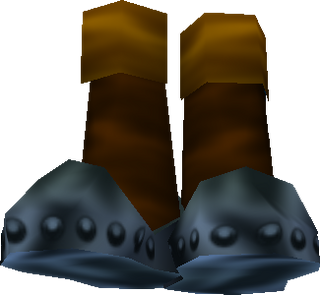 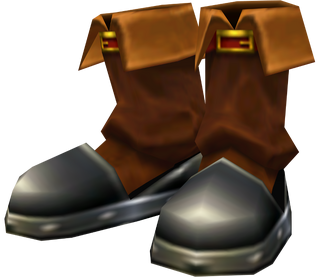 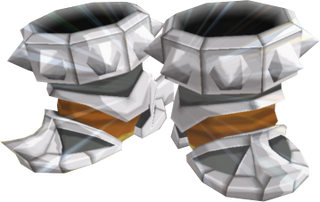 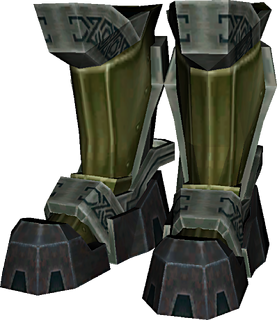 The Iron Boots can be found in the Ice Cavern near Zora's Fountain in Ocarina of Time. When equipped, they make Link walk slower due to their extreme weight,[2] but he can descend to the bottom of lakes and other sources of water.[3] Link must wear the Zora Tunic in order to stay underwater; otherwise, a timer will appear and, if he does not take off the boots and resurface before time runs out, he will drown. They are required to traverse the deep water in the Water Temple, and are also useful in the Shadow Temple, as they enable Link to walk against the fan currents.

In Ocarina of Time 3D, the Iron Boots are changed from equipment to an item, simplifying their use.

The Iron Boots are found inside a cave in the Ice Ring Isle in The Wind Waker. Link can use the Iron Boots to avoid being blown away by the wind,[4] making them required for the Wind Temple. They also allow him to activate springboards by wearing the boots and then taking them off. Additionally, wearing the Iron Boots and using the Hookshot on some statues allows Link to pull them down. Unlike in Ocarina of Time, the boots cannot be used to sink beneath the water, as they are automatically unequipped should Link enter deep water.

In Twilight Princess, the Iron Boots are given to Link by Mayor Bo in the latter's house in Ordon Village after defeating him in a Sumo match. They are an item assignable to specific buttons. They are used to ward off the Gorons while ascending Death Mountain,[5] to prevent Link from being knocked about by steam jets and to defeat Gor Coron, Dangoro and Fyrus.

In the Goron Mines, the Iron Boots are needed to allow Link to walk on magnetic roofs and walls,[6] to weigh down large platforms that open gates and to depress Floor Switches. They are also required to complete the Lakebed Temple, as they allow Link to use Water Bombs while underwater. In the City in the Sky, they can be used to hold Link steady in strong gusts of wind. Link can also roll with them equipped and hurt enemies.

The Iron Boots appear in Cadence of Hyrule as a temporary item that can be found in random locations, which negates the effects of icy surfaces and shallow waters, allowing the user to walk over them as though they were regular floors. Upon being defeated, or the gauge of its usage being depleted, the boots will wear out and be lost to the player until they can find a new pair. They can be bought from a Shopkeeper for 80 Rupees or found as loot from red Treasure Chests.