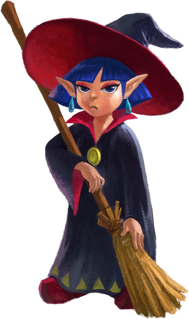 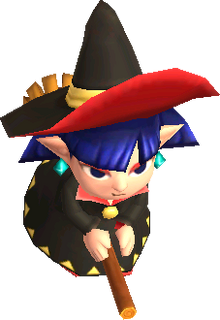 Irene is one of the Seven Sages in A Link Between Worlds.[2] She is the apprentice of the Witch who lives near Zora's Domain.

Link meets Irene early in his adventure. She offers to transport him to any Weather Vane he has activated, and gives him a Bell that he can ring at any time to call her. This is because she received an alarming fortune from the Fortune-Teller in which she is told to "take care of green" in order to avoid the worst outcome.[citation needed] Though she acts grumpy the entire time,[citation needed] she eventually comes to see Link as a friend.[1]

The Painting of Irene appears in Lorule Castle when Yuga is using the power of the Seven Sages to revive Ganon. After Yuga merges with Ganon, the Painting is sent to Misery Mire, but can only be accessed after traversing the Desert Palace in Hyrule. Link rescues Irene after defeating Zaganaga. Inside the Chamber of Sages, she yells at Link for taking so long, but quickly forgives him and urges him to rescue the other Sages.[3] She also tells the young hero that she'll write him a long thank-you letter once he has rescued all of the Sages.[4] Irene remains in the Chamber of Sages until the Triforce is returned to Hyrule, at which point, she returns to the Witch's House to continue her training. Even after being rescued, Irene continues to speak to Link whenever he uses the Bell.[5]