Instruments of the Legend of Zelda Series

For a complete list of instruments in the Zelda series, see Category:Instruments.

Throughtout The Legend of Zelda series, there are numerous instruments used to make music. Some of these serve important purposes, while others are simply for entertainment.

Other woodwind instruments include various Flutes, such as the Recorder, the Strange Flute and the Spirit Flute (also known as the Spirit Pipes). Once again, only the Spirit Flute can be played note by note, using the touch screen and microphone of the Nintendo DS. Carben and Rael also play a flute and an oboe respectively.

The Horse Call and the Grass Whistles from Twilight Princess maybe also be considered woodwind instruments, as well as the Howling Stones and Air Stones, though it is Wolf Link's vocals that are played in the case of the former.

There are many string instruments which feature in the Zelda series, many of which play a major role in the quest.

The first to appear was Sheik's Harp, which she used to teach Link warping songs.

The Zora Guitar is also a string instrument, but again, it is simply a transformation of the Ocarina of Time, activated when Link dons the Zora Mask. Japas is also the bass player of The Indigo-Gos.

The Harp of Ages was next to come, which was the first string instrument to be played by Link. There are three possible songs to be played on it, all of which allow Link to travel through time in a similar way to the Ocarina of Time. The Sea Ukulele, another string instrument in Oracle of Ages, is one of the final objects of the Trading Quest. It is never seen in use, however.

Later, during the events of The Wind Waker, two string instruments were wielded by the Sages of Earth and Wind. The first was Medli's Harp which resembles a golden lyre, while the second was Makar's Violin, which resembles a cello crafted from a large leaf, due to Makar's size.

In Spirit Tracks, Gage plays a cello, and Steem plays a biwa.

Most recently was the appearance of the Goddess's Harp in Skyward Sword, which was first owned by Zelda as a descendant of the Goddess, Hylia. However, Link did eventually claim it and used it to play various songs which would open the gates to the Silent Realms. It is played by swinging the Wii Remote in time with a tempo or beat, using the Wii Motion Plus's added precision motion-sensing controls. This harp is supposedly the same harp that Sheik used later on during Ocarina of Time.[1] 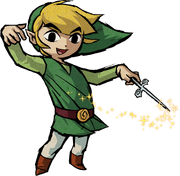 There are only two percussion instruments which are playable in the Zelda series; the Bell, which Link uses to transport himself around Hyrule and Lorule in A Link Between Worlds, and the Goron Drums (though these are a transformation of the Ocarina of Time activated when Link dons the Goron Mask). However, various gongs are seen throughout the series, including within the Swordsman's School. Link can strike these with his sword and they will sound one note.

Likewise, Tijo and Evan from The Indigo-Go's play a drumkit and piano, respectively, and the Happy Mask Salesman teaches Link the Song of Healing on a piano. In Spirit Tracks, Embrose plays a timpani.

The Instruments of the Sirens are musical instruments obtained from each dungeon in Link's Awakening and used to awaken the Wind Fish. They span multiple music families and include a cello, a bell, and a marimba, among others.

The Wind Waker, although not an instrument, is treated as one in the game of the same name; when used, musical notes play according to the direction the Wind Waker is pointed at. It can control the direction of the wind, as well as the passage of day and night and can even summon cyclones to carry Link around the Great Sea.

In Majora's Mask, there is the Music Box House, a building which contains a giant version of a normal music box's mechanism, which is powered by a waterwheel.

Finally, vocals play a part in a few games, most prominently Wolf Link's Howl in Twilight Princess, which can mimic the sounds of the Grass Whistles and Howling Stones. Fi also appears to sing along to the notes of the Goddess Harp each time Link plays a song.

Listings in The Legend of Zelda series
Community content is available under GNU Free Documentation License unless otherwise noted.
Advertisement