Inside the Statue of the Goddess

Inside the Statue of the Goddess 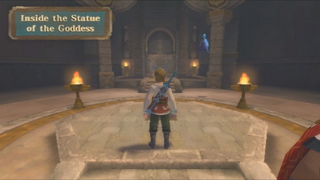 Link, Fi and Gaepora Inside the Statue of the Goddess

Goddess Sword
Inside the Statue of the Goddess,[1][2], also known as the Chamber of the Sword,[3][4] is a recurring location in the The Legend of Zelda series.

The Statue of the Goddess is a significant landmark in Skyward Sword that towers over Skyloft. There are legends of a hidden room inside the statue.[5] Shortly after Zelda is taken by Ghirahim's tornado, Link discovers the Chamber of the Sword. It is here that Link meets Fi, the mysterious spirit that guided him there, and draws the Goddess Sword from its pedestal. This is when Gaepora arrives and tells Link of the prophecy that told of a youth showing up in this sacred place.[6] He also explains that he thought he had seen the sword giving off light as told in the prophecy.[7] Gaepora recites another part of the prophecy, which states that the youth will be guided by one born of the blade and will be wise.[8] Fi then corrects Gaepora, stating that parts of the passage have been lost over time.[9] The true prophecy says that the youth will be known as the goddess's chosen hero, that he has an unbreakable spirit and that he will plummet below the clouds to abolish the shadow of apocalypse.[9] Fi then tells Link that he must go to The Surface beneath the clouds if he wishes to reunite with Zelda.[10] Fi gives Link the Emerald Tablet and tells him that it will illuminate a path through the clouds to The Surface.[11] Link must use a Skyward Strike on the Goddess Crest in the room to reveal the altar where the Emerald Tablet must be placed.[12] Link places the Emerald Tablet in the altar, opening the way to Faron Province.[13] Gaepora then urges Link to find his daughter, Zelda, and bring her back safely.[14] Before Link sets out to The Surface with Fi, Gaepora tells Link that his Knight Uniform is ready and that it will be suitable for his long journey.[15]

Once Link reaches the Skyview Spring, Link finds another Ancient Tablet to use on the altar in the Chamber of the Sword, the Ruby Tablet.[16] After using the Ruby Tablet, the way through the Cloud Barrier to Eldin Province is opened.[17] Link will find the third and final Ancient Tablet at the Earth Spring, the Amber Tablet, which will open the way to Lanayru Province.[18]

The Chamber of the Sword also appears in Hyrule Warriors as the Statue Keep on the Skyloft Stage. The Keep is a crucial area in the "Land in the Sky" Legend Mode Scenario. Link must retrieve Levias's stolen soup there,[19] as it is needed to persuade Levias to connect the island's collapsed pathways.[20] Link hears a mysterious voice as he approaches the Goddess Statue.[21] Upon arriving, he discovers that the voice was Fi,[22] who asks Link if he would like assistance.[23] After obtaining Levias's soup there, the Skyloft Captain asks Link to take the soup to Levias.[24] Fi carries the soup out of the statue for Link.[25]

Skyloft in The Legend of Zelda series
Community content is available under GNU Free Documentation License unless otherwise noted.
Advertisement