"Our guardian god, Lord Jabu-Jabu, would never eat my dear Princess Ruto! But since that stranger, Ganondorf, came here, Lord Jabu-Jabu has been a little green around the gills..."
— King Zora XVI

After seven years, Jabu-Jabu disappears, and as such, adult Link cannot access this dungeon.

Upon claiming the Goron's Ruby from Death Mountain and returning to Kakariko Village, Link learns from Saria that she heard of a ruler in the watery areas in the northeast corner of Hyrule, a leader among the aquatic race, the Zoras. She was told by the Great Deku Tree in times of peace that it was this King Zora XVI who possessed the Spiritual Stone of Water. Encouraged by his friend's words, Link travels to Zora's River, traversing the steep banks and rough currents, and receiving advice from the ever-present owl, Kaepora Gaebora.

Upon arrival in Zora's Domain, Link learns from the people that their leader has fallen into a deep depression at the disappearance of his daughter, Princess Ruto, and the violent turn their patron deity Lord Jabu-Jabu has taken. After participating in the Diving Game at the top of the waterfall, Link is gifted with a Silver Scale, and dives into the bottom entrance of Lake Hylia.

There, he finds a Letter in a Bottle hidden at the bottom of the lakebed. Upon reading the note, Link learns that the author was none other than Princess Ruto, claiming that she had been swallowed by Lord Jabu-Jabu. Taking the note back to King Zora XVI, the ruler, somewhat shocked by the news, permits Link entrance to Lord Jabu-Jabu's fountain, pleading with the young boy to save his daughter. With the backing of the Zora race, and a new resolve, Link journeys into the massive maw of Lord Jabu-Jabu to save Princess Ruto and claim the final Spiritual Stone.

Inside Lord Jabu-Jabu's Belly, Link finds the water god's insides infested with monsters. Inside the main chamber of Jabu-Jabu's belly, he finds Princess Ruto, who acts as though she knew nothing about the message in a bottle found in Lake Hylia. At first, Ruto dismisses Link, saying she does not need his help, but later she allows him the "honor" of carrying her.

Eventually, Link and Ruto come upon a chamber that contains only a single central platform, upon which is the Zora's Sapphire. Ruto jumps off Link's back and grabs it, but the platform suddenly rises into the ceiling. When it comes back down, Ruto is gone, replaced by a Bigocto, the dungeon's mini-boss. After defeating it, Link continues throughout the dungeon, eventually finding the Boomerang and using it to travel ever deeper within the fish's body.

Eventually, he reaches the boss, Barinade, an anenome-like creature that is the cause of Jabu-Jabu's pain. After a long battle, Link defeats it and rescues Princess Ruto.

As the dungeon is inside a living creature, attacking the walls will result in a blue substance coming out and the room shaking slightly. Additionally, spikes on certain objects, electric tentacles and platforms, and floating bubbles indicate the presence of an immune system at work. 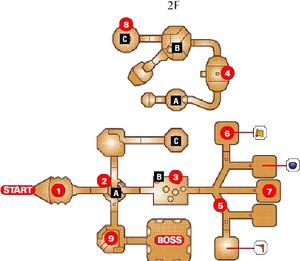 In the Master Quest re-releases, several changes have been made to the dungeon, including puzzles and the order in which rooms are visited. The Boomerang is found earlier, and is needed to gain access to the area where the Parasitic Tentacles are. Bombs or Bombchus are also needed to destroy rocks found inside the dungeon. Strangely, there are several Cows trapped in the walls of the dungeon. Link is required to hit them with Deku Seeds using the Fairy Slingshot in order to solve certain puzzles, or to obtain items. Princess Ruto's importance in solving puzzles is reduced greatly. Stronger enemies such as Lizalfos, Like Likes, and invisible Keese also appear frequently throughout the dungeon.

Retrieved from "https://zelda.fandom.com/wiki/Inside_Jabu-Jabu%27s_Belly?oldid=542309"
Community content is available under CC-BY-SA unless otherwise noted.