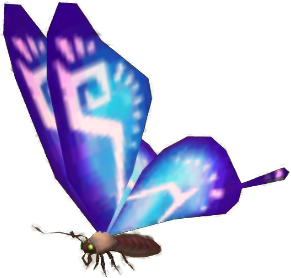 A Blessed Butterfly from Skyward Sword

Unearthing Gold Skulltulas (OoT | MM)
Insects,(Series | BotW)[1][2] also known as Bugs,(OoT | MM | SS)[3] encompass a group of enemies, animals, and collectibles found in various games throughout the The Legend of Zelda series. With the exception of Shadow Insects, Bugs do not have plot-relevance; their role is usually limited to sidequests.

Generic, blue beetle-like Bugs can be stored in Bottles in Ocarina of Time.[4] They can be found under small Rocks and inside Bushes or they can be purchased at the Medicine Shop for 50 Rupees. Each Bottle holds three individual Bugs which, when released, will scatter around for a few seconds, and then dig underground, never to be seen again. Their preferred breeding grounds are mounds of soft soil.[5] These seemingly insignificant Bugs benefit Link greatly while he searches for Gold Skulltulas. If Link finds a mound of soft soil to drop them on, they will burrow into the soil and in so doing may reveal a Gold Skulltula.[5][6] Since three Bugs appear every time they are released, this can be useful to increase or maintain Bug supply by releasing and re-catching Bugs in new Bottles. This trick can also be used for quick money in Ocarina of Time, as they can be sold to the Buyer for 50 Rupees per Bottle.[7]

Bugs take a similar role to their Ocarina of Time iteration in Majora's Mask. If Link releases a Bottle of Bugs near a mound of soft soil, different items such as Rupees, Arrows, and Bombs will come out. This happens everywhere that patches of soft soil are found, with the exception of the Swamp Spider House, where Gold Skulltulas are released instead, much like in Ocarina of Time.

The Bugs of Twilight Princess, Golden Bugs, are found all over Hyrule. A child in Hyrule Castle Town, Agitha, fancies these Bugs and sent invitations to 24 Bugs around Hyrule for a ball. Unfortunately, it seems none have arrived, and she asks for Link's help in bringing all the Golden Bugs to Agitha's Castle.[8] She will reward Link generously upon finding and giving her the Bugs.[9] Collecting them all leads to two Wallet upgrades, each with a higher maximum Rupee capacity. The collection of Golden Bugs is an optional Sidequest and is not required for completion of the game.

There are 12 types of Golden Bugs, and a male (♂) and female (♀) of each type, for a total of 24 to bring back to Agitha for her Bug ball. Both male and female variations of a single Bug exist in the same region, relatively nearby, thus making the hunting for a pair easier.

Bugs are a collectible item found in both the The Sky and on the The Surface in Skyward Sword. At night, they can be sold to Strich, who is particularly fond of them,[10] or used to upgrade Potions at the Infusion Shop. Insects are abundant on Bug Rock in the Thunderhead. At Bug Rock, Stritch runs a mini-game called Bug Heaven during the day, which involves catching specific Bugs within a certain time limit.

Beedle owns a pet Bug called the Horned Colossus Beetle. At some point during the game, Beedle loses his Bug. Link must regain it from Stritch by completing Bug Heaven. For returning the beetle to its rightful owner, Link receives 5 Gratitude Crystals and a 50% discount on all items at the Beedle's Air Shop for the remainder of his journey.

Bugs may be caught by rolling into a wall or a tree with the Bug on it, to make it fall to the ground, though Bugs with a propensity for evasiveness are capable of avoiding capture through this method. Bugs can be stunned by using Glittering Spores, allowing Link to more easily catch these evasive Bug species. Bugs can also be caught from a greater distance by using a Bug Net, which can be purchased at Beedle's Air Shop for 50 Rupees. The upgraded version of the Bug Net, the Big Bug Net, makes it easier to catch insects.

When entering Hero Mode, the current amount of Bugs from the previous game are passed over and are available at the start.

Many Bugs can be found throughout Hyrule in Breath of the Wild. They can be Cooked into Elixirs.

It has been suggested that the portion of this page concerning Butterfly should be made into its own page. Should the target page already exist, this content should be merged into it where appropriate. Discuss this on article's talk page.

Butterflies first appear in Link's Awakening, and similarly in Oracle of Seasons, however Link cannot interact with them. In Ocarina of Time and Majora's Mask, if one butterfly touches a Deku Stick, it will turn into either a Fairy or a Bomb. In The Minish Cap, Joy Butterflies appear as a result of certain Kinstone Fusions.

See respective pages for translations, see here for the translations of each Bug in Skyward Sword.