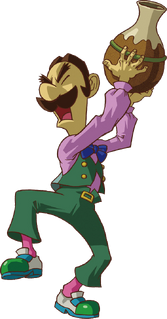 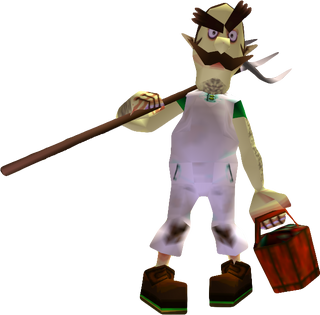 Ocarina of Time
Oracle of Seasons

Ingo is a recurring character in The Legend of Zelda series.[2]

Ingo appears as Talon's employee at Lon Lon Ranch in Ocarina of Time.[3] During Link's childhood, Ingo is found working hard at the Ranch, though grumbles and moans about the laziness of his superior, Talon.[4] Conversely, Ingo appeals to Ganondorf and is granted ownership to the Ranch during Link's adult era. He kicks Talon out of the Ranch and orders Malon to do the hard work while he charges Rupees in exchange for short Horse rides. Ingo will also challenge Link to a Horse race after he recognizes Link's skill for riding Horses.[5] After losing the race, Ingo challenges Link to another race, promising to give him the Horse if he is defeated.[6] He concedes defeat after Link defeats him again, but attempts to trap him and Epona inside the Ranch so that they can never leave.[7] Link and Epona escape the Ranch by jumping over the fence. After this, Ingo's personality seems to have changed, and he is now grateful for the opportunity to work under Talon.[8]

Ingo appears as an easily agitated man who lives in Sunken City and collects Jars in Oracle of Seasons. To complete his vase collection, Ingo wants a Goron Vase,[9] an object which was always refused to him by Biggoron. Link is required to get the vase from Biggoron and trade it for Ingo's dinner to continue the Trading Quest.[10]

Ingo is found in Lon Lon Meadows in Freshly-Picked Tingle's Rosy Rupeeland. Other than giving Tingle a few tips, and allowing him to keep a Recipe he finds, he only serves a small role. Ingo mentions having a wife.

Ingo plays a larger role in the Ocarina of Time manga by Akira Himekawa, acting as a boss himself. He gets brainwashed by Twinrova and sets a trap for Link, but the trap fails and Link is saved by Sheik.

Holodrummers in The Legend of Zelda series
Community content is available under GNU Free Documentation License unless otherwise noted.
Advertisement