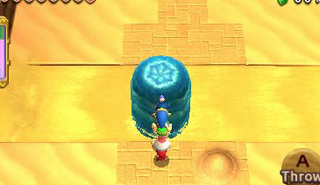 Infinity Dunes,[name reference needed] known as Dunes of Infinity in the PAL release, is a Level in Tri Force Heroes. It is the first Level of The Dunes area.

Infinity Dunes takes place in a large desert consisting of temple ruins. The Level is densely covered in quicksand, which the Links will sink through if they stand on it for too long. Because of this, the Dunewalker Duds, when crafted, becomes useful in this Level.

In Stage 1, the Links appear close to a small desert oasis, where two Gust Jars and a Water Rod can be found. East of the oasis is the sand-covered desert. Several Sand Mounds can be found here, which can be removed by either using the Water Rod or Gust Jar on them, which may reveal Rupees or Hearts. There are a few tiled paths provided, which the Links can safely walk on to avoid standing in and sinking in the sand. Leevers will pop out as the Links make their way across. To the north is a fast-moving river of sand. The Links can cross it either by propelling each other across using the Gust Jars or use the Water Rod to create a bridge of water spouts. The next area has Sandfish swimming in the sand, which will quickly respawn if the Links try to destroy them. At the far end are three Switches: one is beneath a Sand Mound, and another is on a ledge also covered by sand. Pressing all three creates a bridge to the cliff wall, where the Triforce Gateway is found.

In Stage 2, the Links appear in a sand-filled pit where immediately they fight off Vultures, Leevers and Life Likes. To the left and right side of the arena are plant sprouts, which can be watered with the Water Rod to grow Bomb Flowers. These can then be thrown at the Life Likes to easily defeat them. After they are all defeated, a pair of doors open to the next Triforce Gateway.

In Stage 3, the Links appear in front of a tomb with the Triforce Gateway inside. Its two doors immediately close as the Links enter the area, forcing them to search for ways to open them. To the west is a sprout between a group of bushes, which watering turns into a giant leaf that will lift the Links to the ledge above. Another plant sprout that will grow into a leaf, plus a Squiddy, can be found there. On the next set of ledges, the Links come across a Switch; however, it will close if the Links try to approach it. Across the river of sand are a pair of sprouts, which can only be reached by propelling the Links across using the Gust Jar. These sprouts produce a Bomb Flowers, however because the gap is too wide to throw them over, one Link will have to propel one Bomb across using his own Gust Jar. The Link on the other side can then throw it at the Switch before it explodes. Activating the Switch opens one of the tomb's doors.

The next ledge requires one Link to be pushed across by the Gust Jar. Another Switch can be found on top of a ledge, next to a river of sand, which will also close if approached. To hit this Switch, the Link on the second ledge will have to propel one of the Bomb Flowers over. The other Link will then have to quickly create a water pillar to the Switch, and grab and throw the Bomb to it before it explodes. This switch can be activated more easily if one Link creates a water pillar in front of the switch, picks one of the Links that is equipped with the Gust Jar, and lets him shoot the switch with it from atop the water pillar.This Switch opens the last of the doors, allowing the Links to drop down and reach the Triforce Gateway. If they drop down near the falls of sand, they can find Rupees sitting on small ledges, as well as a Chest containing a silver Rupee on the rightmost side.

In Stage 4, the Links drop into a walled enclosure filled with sand. A Hokkubokku immediately rises from the sand after they fall in. The enemy can be defeated either by forming a full Totem and striking its head, or by using the Water Rod to reach it. The Links can also strike the body of the Hokkubokku, but the segments will bounce around the room when struck, so this is a riskier option. Whichever strategy they choose, the Links must also be careful of where they stand, as the sand is still hazardous. After the first Hokkubokku is defeated, three more will appear. Their defeat opens the doors to the last Triforce Gateway.