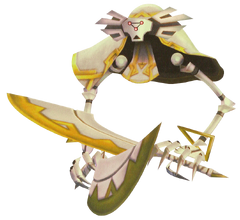 There are certain enemies that Link never will be able to completely defeat.

The many incarnations of Link have been faced with a plethora of different enemies. Some can be defeated simply by a properly-timed sword slash, while others require greater ingenuity, such as using a specific item or sword technique. However, there are some enemies that can be defeated under no conditions.

Many of the Animals found in The Legend of Zelda series may be docile animals by nature, but will attack if provoked.

The main dairy-producer in Hyrule during the events of Twilight Princess, an entire ranch is dedicated to them in Ordon Village. If Link attacks a goat, flips one over by its horns, or hollers at one too often while riding Epona, the goat may become enraged and charge at Link. The goat is incapable of actually damaging Link, however.

In The Wind Waker, pigs are generally peaceful animals that struggle in vain when picked up. They come in three varieties: pink, black, and pink with black spots. If a pig is attacked too many times, it turns red in anger and relentlessly retaliates against Link. If there are any nearby pigs, they will also attack him, much like the Cucco's Revenge Squad. The pigs will stop chasing Link if he enters a building or goes to a place where they can't reach him, like on top of a high object or in a body of water.

After returning to Outset Island from his quest at Greatfish Isle, Link finds that one of the pigs has grown immensely. This pig can be provoked as well, and it will deal out three hearts of damage if Link is hit by it, which is more damage than Ganondorf can deal.

Docile during the day, Remlits are seemingly harmless small creatures that inhabit the floating island of Skyloft. However, once night falls, they will aggressively attack Link. If enough sword hits are landed on a Remlit, the tiny monster will whimper and retreat, curling itself into a tight ball. Link can continue beating the cowering creature, but it will never be completely destroyed. Even throwing a Remlit off of Skyloft will not kill it. The creature will use its large ears to fly back to solid ground.

Once Link collects all 80 Gratitude Crystals, transforming the gentle monster Batreaux into a human, Remlits will cease to attack Link. They can still be beaten into a state of fetal submission, however.

Deku Hornets are bee-like Bugs in Skyward Sword. Similar to most of the other bugs in Skyward Sword, the Hornets are collectible with a Bug Net. Yet unlike all the other insects, the Deku Hornets won't run cowardly for their lives, rather come at whoever approaches them, in swarms - and they do inflict damage. This allows Link to "harvest" them with his net. However, Link can only catch a maximum of 99 Deku Hornets and if he surpasses that number, he stands vulnerable and defenseless to the stings.

Peaceful creatures by nature, Cuccos can be found in many locations throughout Hyrule and other lands. If Link relentlessly abuses one, the enraged Cucco will call for the "Cucco's Revenge Squad". This squad is a barrage of enraged Cuccos that will rain from the sky and attack Link. The squad is invulnerable to any of Link's attacks, though their assault will be ended once Link enters a building or exits the area. However, in Link's Awakening, it is possible to slay a Cucco without alerting the horde, by setting it on fire with the Magic Powder or Magic Rod.

Like Remlits, Gorons are typically a docile and friendly people. However, there are many instances in which Gorons will (whether intentionally or not) attack Link. However, it is not possible to destroy a Goron in any game. 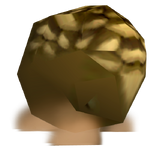 When the Gorons refused to relinquish the Goron's Ruby prior to the events of Ocarina of Time, Ganondorf blocked the entrance to Dodongo's Cavern, thus cutting the Gorons off from their food supply. In an effort to feed his starving people, a lone Goron repeatedly attempts to roll down Death Mountain Trail with a Bomb Flower to destroy the rock barrier placed by Ganondorf. Intently focusing on his goal, the Goron will not notice Link as the young hero passes him on Death Mountain Trail, and may explosively slam into the green-clad boy. Link has no way to damage the rolling Goron.

There are two Gorons rolling in Goron City as well: Hot Rodder Goron in Child Link's time, and the Goron named Link in Adult Link's time. These two Gorons roll continuous laps around the circular Goron City, and they must each be stopped by exploding a bomb in their path.[1] However, like the Gorons on Death Mountain Trail, they may damage Link by crashing into him.

Due to an order from Gor Coron, all outsiders were prohibited from infiltrating the Goron tribe's home in Death Mountain.[2] The Goron guards will roll at Link, attempting to force him back to Kakariko Village. The only way to get past these foes is to equip the Iron Boots and wrestle the attacking Goron to the ground.

Note: it is also possible to evade the Gorons while in Wolf Link form, though this requires a specific glitch found in the game.

Once Link has successfully worked his way to the Goron's home, many of the rocky creatures will attempt to deal powerful blows to the invading hero. After a few sword attacks, however, the Gorons will curl up, allowing Link to climb on top and be launched high in the air as the Goron springs back into a standing position.

Despite Link being able to temporarily disable the Gorons in Twilight Princess, he is never able to completely destroy one.

These enemies appear only in Silent Realms. A single blow of their swords will shatter Link's spirit and force him to restart the trial. There are two types of Guardians that inhabit Silent Realms. One looks like a mace-wielding Darknut, which can run quickly, but is limited by obstacles and generally confined to certain areas. The other type is a robed beast that slowly hovers around with two blades, passing through any obstacle in its way, and vaguely resembles a Garo. Both types have three distinctive glowing eyes and pure white armor and robes laced with black and gold. If Link has gathered a Sacred Tear within the past 90 seconds, the Guardians will return to their dormant state.[3]

When in a Silent Realm, Link is allowed to bring no weapons along. As such, it is impossible to fight a Guardian, and they are effectively invincible.

While transporting the captured light-bearing Sols from the Palace of Twilight to the Pedestals of Light, Link will be constantly accosted by one of Zant's Hands. These disembodied hands can pass through solid objects, and will continue to follow Link until he manages to escape the Palace wing that he is currently in. The hands can be stunned by sword slashes or three shots of the clawshot or arrows, though there is no way to permanently destroy them. Once the Sol has been placed in its Pedestal of Light, the Hand corresponding to that Sol will remain in the back of its Palace wing, completely lifeless. These enemies have no means of directly harming Link.

These creatures, later adopted by the Mario series, exist as a malicious, aggressive ball on a chain attached to some central point. This point is typically a block or a torch, though the point is occasionally a Link. They are not an enemy in all games they appear in, notably Link's Awakening, in which Link must rescue a pet Chain Chomp named BowWow.[4]

A Chain Chomp appears again, briefly, as an indestructible obstacle in Kakariko Village. As with A Link to the Past, this one is an enemy in the same sense Blade Traps are enemies.

A Phantom is an extremely powerful enemy, able to knock out Link with only one swipe of its sword. They appear in many varieties, most with different abilities. These enemies are presented in a similar fashion in both Phantom Hourglass and Spirit Tracks. When a Phantom attacks Link, it forces him to automatically return to the door from which he entered the area, but it will only cost him one heart of his health. When Phantoms first appear, Link has no means of defeating these powerful enemies.[5] Though Link does later gain the ability to defeat these foes, in their initial appearance they are invincible.

Appearing in every game except for The Adventure of Link, Blade Traps have threatened every known incarnation of Link. They damage the green tunic-wearing hero by simply gliding into him. Some have motion-sensor capabilities, meaning they wait for Link to appear before launching, whereas others continuously follow a set path. No attack can be used to damage these enemies, except for an axe smash from a statue controlled by the Dominion Rod in Twilight Princess.

Chasers appear in a number of games. They are similar to Blade Traps in that they will chase Link if he crosses their path in one of the four cardinal directions. They move slower than Blade Traps however, and will not return to their original position once reaching a wall. They will instead stop at their new position, and "chase" Link from there. As to be expected, Chasers are often found in narrow corridors where they are harder to dodge.

Stone Statues are tall, sometimes fire-breathing, rock monoliths scattered abundantly about the many dungeons in The Legend of Zelda series. These statues reflect the motif of their dungeon, expressing such in the form of individualistic symbolism and decoration. While statues of stone appear in all Zelda titles to date, only those in The Legend of Zelda, Link's Awakening, Oracle of Ages, and Oracle of Seasons are of any such significance. The fact that they cannot be destroyed only adds to the intangible mystery surrounding such rock.