A Link to the Past
Ocarina of Time

The Imprisoning War, or the Seal War in Japan, is an event from the Legend of Zelda series. The Imprisoning War is first mentioned in The Legend of Zelda: A Link to the Past. It is covered in detail in the manual, but the North American localization differs in several key places from the original Japanese, making it inconsistent with the story told in other parts of the series.

It is stated that the war occurs after a conflict over attempts to acquire the Triforce from the Sacred Realm. One day, a gateway to the Sacred Realm was accidentally discovered and opened by a man named Ganondorf and his band of thieves. Ganondorf then murdered all his followers that had accompanied him so that he could claim the Triforce uncontested.

Obtaining the Triforce, Ganon used its power to corrupt the Sacred Realm. Striving to rule Hyrule as well, Ganon called out to men that were filled with greed, turning them into monsters that he could lead. Eventually, Ganon managed to amass an army, with a war ensuing between Ganon`s forces and the forces of Hyrule.

To fight Ganon, the Seven Sages sought a hero that could wield the Master Sword, a weapon that slayed evil. However, the Seven Sages could find no such hero. Thus the sages decided to create a seal which could stop Ganon.

The Knights of Hyrule fought valiantly against Ganon`s forces, with many losing their lives as a result. The war finally ended when the Seven Sages cast their seal on the Dark World while being protected by the remaining Knights of Hyrule, trapping Ganon and his army inside. With Ganon defeated, peace finally returned to Hyrule. The events of A Link to the Past take place a long time afterward.

In an interview conducted at the time of the release of Ocarina of Time, the game's character designer, Satoru Takizawa, and the game's script director, Toru Osawa, stated that the Imprisoning War and the Seven Sages seen in Ocarina of Time are the same ones mentioned in A Link to the Past. This is carried over to the Hyrule Historia, where it is explained that the Imprisoning War occurs in the Fallen Hero timeline, in which Link is defeated by Ganondorf during The Legend of Zelda: Ocarina of Time.

Aside from the events of Ocarina of Time, there are several other contradictions such as;

The exact reasons for these supposed errors are of course not known for sure, leaving many fans to speculate on the differences between the games. Possible theories explaining the continuity errors appear below.

The King of Hyrule

It is not known for sure whether or not the King of Hyrule is killed in Ocarina of Time, although this is heavily implied by his absence following Ganondorf's siege of Hyrule Castle. Due to the fact that the Hyrulean Civil War was fought over the Triforce, it is possible that the King of Hyrule may have commanded the essences of the Sages to seal the Sacred Realm shut shortly after the conclusion of the Hyrulean Civil War, seeing as it caused this war. This would be in keeping with the King's command spoken of in A Link to the Past, since gamers are not told explicitly that the King's command to seal the Realm came at the particular moment of Ganondorf's invasion of the Sacred Realm.

The Seven Maidens of A Link to the Past are supposedly the descendants of the Seven Sages of Ocarina of Time, and yet while the Seven Sages are of differing races, the Maidens all appear to be human.

This inconsistency, as well as all other inconsistencies regarding the Imprisoning War in A Link to the Past, can however be linked to the last line in the game's prologue:

"...But, when these events events were obscured by time and became legend..."

While there are many differing plot points between the two tellings of the events, the idea that the story was lost over time and reduced to a legend indicates inconsistencies by default. Many events chronicled through "legend" that take place in earlier Zelda games feature inconsistencies, including the prologue to The Wind Waker which also depicts the events of Ocarina of Time with slight inconsistencies.

Dummied data for Four Swords Adventures indicated that the plotline was meant to expand and even lead into the events of the Imprisoning War that was alluded to in A Link to the Past. However, several of these were cut from the final version due to Shigeru Miyamoto suggesting a simpler storyline. 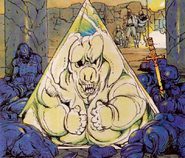 Retrieved from "https://zelda.fandom.com/wiki/Imprisoning_War?oldid=523061"
Community content is available under CC-BY-SA unless otherwise noted.