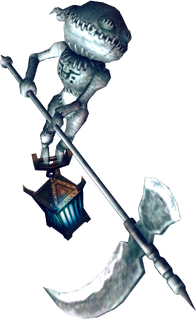 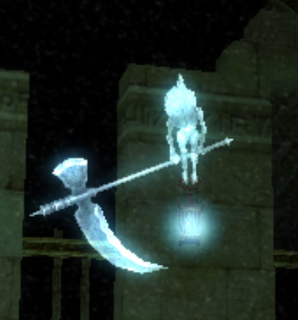 Imp Poes possess a unique doll-like appearance, and carry a large scythe with which they use to attack. Their Lanterns are instead attached to their feet. When Link is a human, only their floating Lanterns can be seen. When an Imp Poe is about to strike Link, it will glow brightly if seen through Wolf Link's senses. Imp Poes only come out at night and can only be defeated as Wolf Link by using his senses. Once an Imp Poe has been damaged, it will fall to the ground and its Soul will become visible, which can be ripped out and collected by performing the Ending Blow on the Imp Poe while still in Wolf form.

A man in Hyrule Castle Town named Jovani was cursed for his greed and had his soul stolen by Imp Poes, of which there are a total of 60 throughout Kingdom of Hyrule.[2][3] Collecting 20 Poe Souls will break part of the curse on Jovani,[4] and he will give Link a Empty Bottle full of Great Fairy's Tears as thanks, as well as the Ghost Lantern in Twilight Princess HD. After all 60 Poe Souls have been collected, the curse will lift completely, and Jovani's cat, Gengle, will give Link 200 Rupees every time he enters the room thereafter. In Twilight Princess HD, the number of Imp Poes defeated and remaining in each region are tracked on the map screen. Once Link obtains the Ghost Lantern, it will glow if there is an Imp Poe nearby in the general area.