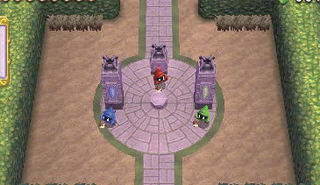 Illusory Mansion takes place in a haunted, garden courtyard outside of an abandoned palace. The Level notably features several floating, colored platforms which only the Link whose color matches it can stand on. If the Links walk onto a platform that does not match, they will fall through. The matching Link can pick up the other Links as he walks across, allowing them to cross over these platforms as well.

In Stage 1, the Links appear on a ledge over a great pit. Three sets of colored platforms lie ahead of them, which the matching Links must use to cross over to the other side. The next ledge has two Poes and three Boomerangs. Immediately after the second ledge is a bridge of green platforms, leading to blue-colored ones. A gap lies between the blue platforms and the next ledge. To cross this gap, the blue Link must first pick up the red Link as a Totem. The green Link then has to pick up the blue Link, and cross the green walkway to throw him to the next set. The blue Link then simply has to throw the red Link over the gap, who can then bring the others back using the Boomerang. On the next ledge, the Links encounter three more Poes and a locked gate barricading the Triforce Gateway. Its Key rests inside a Chest atop a small tower. A pair of blue and red platforms lead to its staircase, requiring that blue Link throws red Link over. Red Link can then toss the Key over to blue Link, or throw it over the tower onto the ground for one of the other Links to collect. Blue Link will have to retrieve red Link from his platform using the Boomerang.

In Stage 2, the Links enter the mansion's hedge garden. They soon encounter a set of three unlit torches, which spawns colored Poes. These Poes can only be attacked by the Link whose tunic matches with their color. Their defeat will light the torches and drop the Key that unlocks the next gate. As the Links approach the gate, two white Poes appear. The gate opens to the next garden with several stone podiums. Six more colored Poes arrive to fight the Links. All of them are floating beyond their reach, and require the Links to form a Totem to fight them. After they are defeated, the Triforce Gateway appears. On the right side of the area is a Switch in some tall grass that can be pressed down to lower a wall revealing a Chest, which contains a silver Rupee.

In Stage 3, the Links appear in a fenced enclosure next to a ledge. A cracked block to the left blocks the Links' passage. The northern ledge has a small blue platform, as well as a Chasupa that will attack if the Links get close. A Bomb Flower sits on a pillar, which is used to demolish the block after being grabbed with the Boomerang. The block reveals a heavy Switch which, after being pressed with all three Links, reveals more colored platforms to the north side and spawns more Chasupas. The Links must cross these platforms to the other side, while throwing each other onto the matching platforms and using the Boomerangs to carry each other over. On the other side are a pair of cracked blocks which must be demolished. This can be achieved by having red Link pick up the Bomb Flower from his platforms and throwing it over to the ledge, allowing another Link to pick it up and throw to the blocks.

The next ledge features more colored platforms to the right side, as well as a Life Like hidden in the north-west among some grass. The blue and red platforms continuously move, requiring the Links to time their throws. The red platform moves close to a ledge above, which can only be reached with a Totem of three. This is made possible by having blue Link carry green Link while standing close to the edge of the blue platform, then having red Link pick them up when his platform moves close. The top Link can then be thrown up to the ledge, where the Triforce Gateway and a Switch lies. Pressing the switch rises a drawbridge, allowing the other two Links to walk to the Triforce Gateway.

In Stage 4, the Links appear on another ledge with more colored platforms, which also move. The Links must again use a combination of throwing each other across and using the Boomerang to get to the other side. As the Links approach the staircase, Poes suddenly appear, three of which are colored. Defeating them reveals a Chest containing three Hearts. The Links then arrive to a circular platform with a pit in its center, and three Switches to be pressed. The Switches will lower the bridge leading to the platform, and a group of Prankster Poes will appear. These enemies will attack the Links by sneaking up to them, then grabbing them to throw off the ledge. Once they are defeated, the bridge to the Triforce Gateway appears.

Illusory Mansion includes the following Drablands Challenges: "Fewer Heart Containers!", "Clear within the time limit!", and "Don't fall at all!".

Houses in The Legend of Zelda series
Community content is available under GNU Free Documentation License unless otherwise noted.
Advertisement