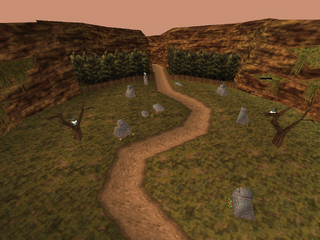 The Ikana Graveyard is a location in Majora's Mask.[1]

The graveyard is directly north of the main road connecting Termina Field with the Kingdom of Ikana. It is the final resting place for the Royal Family of Ikana Castle.[2] Stalchildren, the undead soldiers of Ikana Kingdom,[3] can be found in the graveyard at night, patrolling the graves and warding off intruders. Dampé the gravekeeper resides here as well. Despite his working conditions, Dampé is quite timid.[4][5]

At the end of the graveyard lies the remains of Captain Keeta. To the left of his skeletal body is a sign which states that anyone who awakens Keeta must defeat him in order to extinguish the flames surrounding the Treasure Chest above Dampé's home.[6] After Link plays the "Sonata of Awakening," the captain rises from his sleep and challenges Link to a race. Using projectiles to stint his pace, the young hero can catch up and a battle him. After Link defeats him, Keeta declares the ancient war between Ikana and the Garo to be over and grants him the Captain's Hat for the purpose of conveying this message to his army.[7]

The Captain's Hat, which houses Skull Keeta's soul,[8] is one of only a few non-transformation masks that are essential to the completion of the quest. It allows Link to talk to the Stalchildren that appear in the graveyard at night. Speaking with them while wearing the Captain's Hat allows Link to open the grave sites that the undead soldiers are guarding.[9]

A Secret Grotto lies hidden in a circle of rocks against the wall across Skull Keeta's location, which can be revealed using Bombs. The Grotto contains two Withered Deku Babas and a Mini Baba, along with a Treasure Chest with 5 Bombchu inside.

The lanterns throughout the graveyard will each yield three Green Rupees when shot (or attacked in some way, e.g. Bombs). During the Second Day, if Link defeats all the Bad Bats and then talks to Dampé, he will reward him with 30 Rupees.

Main article: Beneath the Graveyard

The grave being patrolled on the night of the First Day is the only one that is necessary to open. The Stalchildren, who mistake Link for Skull Keeta while wearing the Captain's Hat, promptly follow his instructions and demolish a tombstone to reveal an entrance to the nether regions of the graveyard. Within this area, Link must battle an Iron Knuckle in order to release the imprisoned soul of Flat, one of the Composer Brothers. Flat reveals the inscription for the "Song of Storms" and asks that Link cleanse the soul of his cursed brother, Sharp, using the melody he has just learned.[10]

On the night of the Second Day, the Stalchildren will be guarding a different grave. Asking them to open it reveals another section of the cavernous areas beneath the Graveyard. This segment contains many hidden enemies and traps that Link must uncover using the Lens of Truth. At the end of the grave lies another Iron Knuckle, which must be defeated to reveal a Treasure Chest containing a Piece of Heart.

The grave guarded by the Stalchildren on the night of the Final Day leads to an entirely separate location from the one accessed on the two prior occasions. This one has Dampé wandering inside it, who claims to be searching for the Royal Family's treasure. However, his torch has gone out, and he asks Link to guide him using Tatl.[11] After a brief expedition which involves digging several isolated patches of dirt, the young hero and the gravekeeper uncover three blue flames that merge to reveal a Big Poe. Dampé flees in terror, leaving Link to battle the ghost alone. After its defeat, a Treasure Chest appears containing an empty Bottle. In Majora's Mask 3D, the chest contains another Piece of Heart. Upon ascending the stairs at the end of the area, the gravekeeper can be found hiding under his bed, stricken with fear.