It has been suggested that the portion of this page concerning Ikana Region should be made into its own page. Should the target page already exist, this content should be merged into it where appropriate. Discuss this on article's talk page. 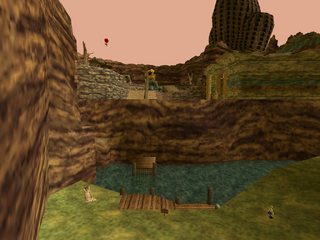 Termina
Ikana Canyon is a location in Majora's Mask.[1] It is the eastern area of Termina. It is known to be a cursed land where the Ikana Kingdom once existed, being home to the dead and filled with spirits who linger with regret and hatred.[2] The Garo Ninjas can also be found here spying on the deserted land.

Like Great Bay Coast, the Road to Ikana is blocked by fences that can only be jumped over using Epona. To get to Ikana Canyon, Link must show the Garo's Mask or the Gibdo Mask to the Poe Collector.[3][4] By doing so, the man will make a tree appear beside him, allowing Link to Hookshot up to it and continue on his way. Once further inside the Canyon, Link must make use of his Ice Arrows to cross the Octorok-infested river and Hookshot his way up to the main part of the Ikana Canyon.[5]

Ikana Canyon is notable for having more than twice as many boss battles (mini-boss and optional included) than any other place in the rest of Majora's Mask, totaling twenty-six if each boss is counted as an individual in a battle. During his stay in this region, Link will have to visit most of the landmarks in order to finally bring peace and calm the lingering spirits that fill Ikana Canyon with such a history of greed and hatred.

Long forgotten by the world, like much of the rest of Ikana Canyon, the Castle has crumbled into ancient ruins, populated by nasty traps, evil monsters, and lost souls seeking revenge on the world. At the end of the Castle, the King of Ikana and his two Lackeys await a savior to bring Ikana out of its curse.

Main article: Beneath the Well

Ikana's Well features a network of water channels and chambers that has been long-dried up from the evil powers of Ikana's undead. Banned for entry by Pamela's father, due to "ghost sightings,"[6] the Well has become the home of a Gibdo community that await certain items for which they will trade passage into the next room.[7] Once Link has escaped from the Well, he can obtain the Mirror Shield and journey into Ikana Castle.

Ikana Graveyard is an eerie burial ground kept by Dampé the grave keeper who patrols by day and hides by night,[8] claiming he is frightened by ghosts.[9][10] As night falls upon the canyon, the undead soldiers of Ikana awaken and guard the graves.[11][12] Here, Link can obtain the Captain's Hat by defeating the soldiers' gigantic captain, Captain Keeta, who rests under an arch near Dampé's house.[13] On each night of the three day cycle, the soldiers open a new grave which feature a small dungeon within, the first being a tomb guarded by an Iron Knuckle where Link learns the "Song of Storms".[14] The second grave contains an Iron Knuckle and a Piece of Heart,[15] and in the third Link finds Dampé searching for an empty Bottle, who asks to use the aura of his Fairy to light the way.[16][17]

The dried up Ikana River pours down from a haunted grotto and into the canyon's neighboring region, the Southern Swamp below. The ghost composer Sharp inflicted an evil curse upon the river in the hopes of destroying all life in the valley. Only by playing him the "Song of Storms" written by his brother, Flat, will water flow again.

The Music Box House is where Pamela and her Father, a ghost researcher,[18] reside while fending off the undead with the carnival-like song, "Farewell to Gibdos", which plays from the trumpet-like contraption atop their house.[19] A group of Gibdos encircle the house looking for Pamela's Father, who is half-mummified from an encounter with Gibdos in the Well.[20] Frightened, Pamela shoves her father in a closet and promises to protect him from any further harm, despite the fact that the source of the Music Box's power, the river, is dried up.

Link can obtain the Gibdo Mask from within the house by playing the "Song of Healing" in front of Pamela's father.

The Road to Ikana is a rocky gorge ridden with iron fences, ancient statues, and enemies called Nejirons that resemble Gorons, but explode on contact. The Pass features an entrance to the Ikana Graveyard and the main canyon.

Sakon the thief, who plays a major role in the Reuniting Kafei and Anju sidequest, has his Hideout hidden here behind a large seal that only he can open. Once inside the hideout, Link finds a virtual maze featuring puzzles, enemies, and traps.

The Secret Shrine is an optional cave found behind the Underground Waterfall.[21] Inside it, Link will find numerous mini-bosses, all of which were fought in previous Temples.

The Spirit House is a small hut where Link can test his strength against the Poe Sisters.

The Spring Water Cave has also been dried up due to the curse cast upon it by the ghost composer, Sharp.

The Stone Tower contains several Fire Keese and Beamos, along with many Boulders and a bottomless pit. Link plays the "Elegy of Emptiness", learned from Igos du Ikana, to hold down switches that move large, mobile blocks into various positions, allowing passage to the Stone Tower Temple. Once Link obtains the Light Arrows from the Garo Master, he can fire a Light Arrow into the red gem near the entrance, which will flip the entire tower, including the Temple.

The Stone Tower Temple is located at the highest point of Ikana. The tower is full of undead creatures, ranging from ReDeads, Poes, Eyegores, Armos and Garos. Within, Link fights the Garo Master, from whom he receives the Light Arrow as spoils, and the bat-attracting Gomess, from whom Link acquires the Boss Key. At the end of the Temple, Link can obtain the Giant's Mask and is warped into a mysterious desert where he duels Twinmold, two gigantic parasites.

This waterfall can be found at the beginning of the river that separates the lower terrain of the canyon from the upper one. Behind it is the Secret Shrine, and at the end of its river is Southern Swamp.