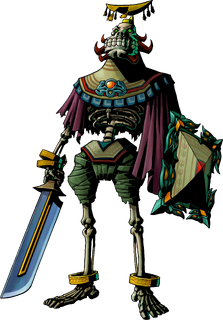 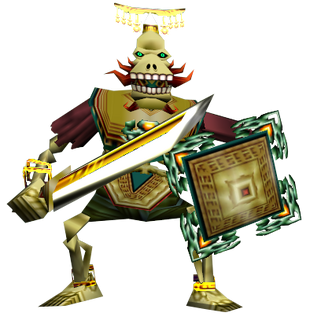 Igos du Ikana is the long dead king of the Ikana Kingdom. Once Link defeats him, he explains the source of Ikana's curse.[5] He will then proceed to teach him the "Elegy of Emptiness," which is necessary to return true light to the land of Ikana.[6][7] Igos du Ikana is last seen during the ending credits.

Igos du Ikana will watch the battle against his Lackeys from his throne, deflecting any attacks thrown his direction. If Link ventures near him, he will be kicked back into the midst of battle.

When fighting the King himself, he can take off his head and chase Link while the rest of his body keeps attacking with the Sword. Link must watch out for the head when it comes off, as there is no way to counter it. If the flying head attaches to Link, it will latch on to his face, taking Hearts away. Igos du Ikana can also breathe purple flames as a mid-range attack. When he falls down on the ground, Link must shine the light on him using his Mirror Shield to defeat him.