This article is about the Level in Tri Force Heroes. For similar Dungeons, see Ice Temple (Disambiguation). 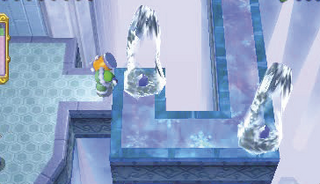 Ice Temple is a Level in Tri Force Heroes.[name reference needed] It is the fourth Level in the Ice Cavern area.

The Level consists of a frozen palace set high above the sky. Icicles and snow mounds found throughout the Level often contain Rupees and Hearts inside them, which may be broken with the Hammer or melted with the Fire Gloves provided in the Level. The temple has icy and slippery floors, giving it poor traction. As such, the Cozy Parka can be helpful here.

In Stage 1, the Links begin at a platform where immediately to their right is a narrow, frozen walkway blocked by an icicle. A pair of Hammers are immediately provided, which can smash away the obstacle. After grabbing one, the Links' attention to brought to a lone Fire Glove further away. The Links carefully walk the path to a platform with several Terrorpins, whose shells can be flipped over with the Hammer. To the north and east are Moles — the one in the north is blocked by wooden posts, which can be pounded down by forming a Totem. The Moles can be pounded with the Hammer, and will spring up any Link who stands on one. The Moles to the east spring to the Triforce Gateway, but it is blocked by an icicle, while the Mole in the north can be used to spring the Links to a moving platform above. This takes the Links to another platform with three Switches, which open the door to the Fire Gloves. After taking the final item, the Triforce Gateway is opened. The Links can now melt the icicle in front of the Mole to reach the Triforce Gateway.

Stage 2 features a giant, snowflake-shaped platform with numerous tiles of ice. The sheets of ice will crack under the Links' combined weight, and can also be broken with the Hammer and melted with the Fire Gloves. This will create holes that the Links can fall through if they are not careful. The ice however will shortly freeze over again. As the Links approach the area, a horde of Deadrocks spawn. The Links must defeat them by hitting them with the Hammer to stun them, and again to defeat them, while also being careful of the tiles of ice. Once all the Deadrocks are defeated, a bridge to the Triforce Gateway appears.

In Stage 3, the Links appear at another walkway leading to a frozen path where giant snowballs roll. A wooden post in the middle of the road blocks the path of the snowballs, and must be pounded down to continue its path. The snowball will stop a stream of frigid air as it rolls by, allowing the Links to safely pass it and continue. At the end of the path is a Mole which springs the Links to the ledge above. The Links must use the rolling snowballs to pass more streams of cold air along a frozen walkway. Another Mole must be used to jump over a gap, but it must be timed well as a stream of cold air runs across the next platform. At the end is a stairway leading to a Triforce Gateway over a large gap, with several Keese and an Ice Keese flying above the gap. One Link must light the torches to make a bridge appear. A chest sitting on a ledge contains 20 Rupees, and can be reached by forming a Totem.

Stage 4 is where Blizzagia is fought in a snowy cave.

"Don't get hit by snowballs!"