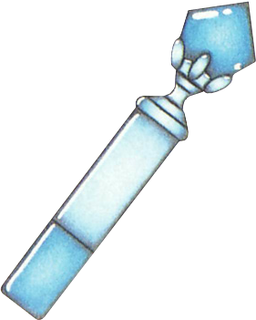 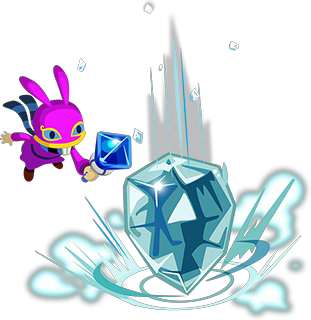 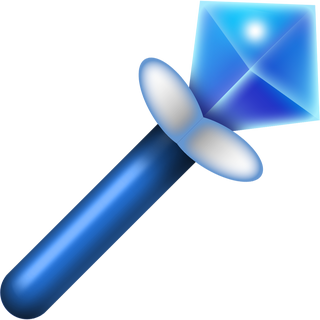 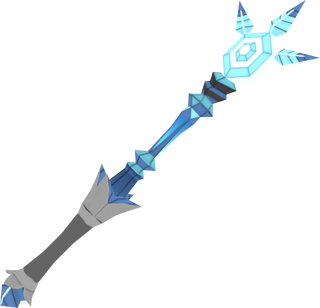 The Ice Rod is located in the Ice Cave east of Lake Hylia in A Link to the Past. Link must use a Bomb to gain access to the cave. When used, the Ice Rod launches freezing ice that can permanently freeze enemies. It can also instantly defeat some enemies, such as Crows. The Ether Medallion has a similar effect.

The Ice Rod is required to defeat Trinexx, the boss of Turtle Rock. It is also is particularly effective against the Lanmolas of Desert Palace.

The Ice Rod drains the Magic Meter. Fortunately, a frozen enemy that is smashed with the Magic Hammer will often leave behind a Magic Jar.

The Ice Rod in A Link Between Worlds functions differently from A Link to the Past, though its effect is the same. Instead of launching balls of ice, it drops an ice block in front of Link. It can be rented from Ravio's Shop at any point in the game for 100 Rupees, or purchased for 1200 Rupees; 800 if it is the first item bought. As in A Link to the Past, the Ice Rod is essential to completing Turtle Rock.

Ice Rods are imbued with Ice elemental energy, generating a flurry of Ice when swung. However, Ice Rods are fragile and will break easily if they make direct contact with objects or enemies. Ice Rods will also break simply from extended use. If Link executes a Spin Attack while wielding a Ice Rod, he will let loose five blasts at once in different directions. They also provide minor Heat Resistance, though they have no effect in Scorching Climates. When thrown with the R button, Ice Rods will not leave Link's hand and instead produce a flurry of Ice that will advance in the direction they are thrown. Ice Rods will temporarily lose their magical properties if used excessively, requiring a brief cooldown period before they can be used again.

In Hyrule Warriors, the Rented Ice Rod is used by Ravio as part of the moveset for his Rental Hammer Weapon. It can be used to smash enemies with chunks of ice or create icicles that can launch enemies into the air or freeze them.

In Hyrule Warriors, the Ice Rod also appears as an Item Card in the Lorule Map. It can be used to destroy fire statues, removing locks on certain adjacent squares so that they can be opened normally. Using it will activate the Water Element Nice Power on the Ravio Board.

In Hyrule Warriors: Age of Calamity, Ice Rods are tools that can be wielded by all Warriors in Hyrule Warriors: Age of Calamity, as well as Ice Wizzrobes. Located on the left bumper wheel with the Fire Rod, Lightning Rod, and Apple, Ice Rods are limited charge attack items that will freeze anything in its attack radius, and can help whittle away at exposed Weak Point Gauges. This attack radius is larger when used in enemies that are in water. The Ice Rod need ice elemental energy as fuel for its attacks, and the amount of charges the Rod has carry over into future battles, meaning completing battles with an empty Ice Rod will have the Ice Rod remain out of charge. The energy needed to power the Ice Rod can be found by either slaying Ice Monsters such as Ice Wizzrobes or smashing open crates.

The Ice Rod is first obtained by slaying the player's first Ice Wizzrobe, with the first one being found in the Scenario "Road to the Ancient Lab". The Ice Rod help make the Weak-Point Gauge of Fire Monsters such as Fire Moblins, Fire Hinoxes, Fire Lynels, and Fireblight Ganon, drain faster, allowing to chain Weak Point Smashes more consecutively.

While the Ice Rod innately has three charges, completing the "The Research of Rods" and "It Takes Two" Quests each rewards Warriors one additional charge to all Rods, the Ice Rod naturally included.

The Ice Rod appears as a weapon in Cadence of Hyrule, capable of launching balls of ice at enemies from a distance at the cost of Stamina, sometimes causing them to be frozen temporarily. When either Cadence, Link, or Zelda runs out of stamina, the rod can then be used to club opponents at close range. If the projectile flies above water, it will freeze the water beneath it, allowing the heroes to walk on water temporarily without having to use the Zora's Flippers.