Zelda Wiki
Register
Don't have an account?
Sign In
Advertisement
in: Enemies, Common Enemies and Traps, Eye Enemies,
and 17 more 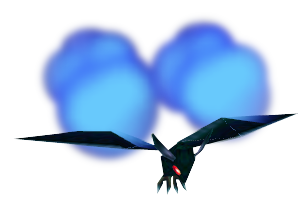 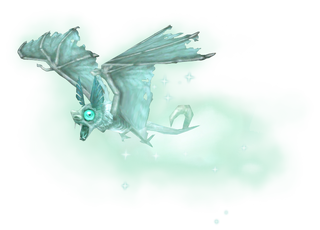 Ocarina of Time
1
Breath of the Wild
1

Ice Keese Wing (BotW)
Keese Eyeball (BotW)
Ice Keese are recurring Enemies in The Legend of Zelda series.[1][2] They are a variation of the Keese that are exposed to the cold, and are enveloped in a frigid, icy mist. Ice Keese otherwise behave identically to their regular counterparts, but are significantly more dangerous as they can potentially freeze Link upon contact.

They inhabit frozen caves and mountains, ice-themed dungeons, and other cold locations. In some games, Ice Keese can revert back into an ordinary Keese when their mists are extinguished. They may also intentionally fly into a source of cold substance, such as Blue Fire, to turn back into an Ice Keese.

Ice Keese made their first appearance in Ocarina of Time and Majora's Mask. They are encountered only in snowy and icy areas, such as the Ice Cavern in Ocarina of Time and Snowhead in Majora's Mask. Like normal Keese, they fly around the area and attack Link by swooping down at him. Coming into contact with one will immediately freeze Link on the spot, damaging him as well as rendering him immobile for a few seconds until he breaks free. Although hazardous, they can be defeated by any conventional weapon in Link's arsenal. If an Ice Keese loses its icy mist, it will seek out and fly into Blue Fire to regain its mist.

Ice Keese in Twilight Princess appear as chilled bats fully engulfed in mist. They mainly appear in frigid locations, most notably around Snowpeak and the Snowpeak Ruins, but also appear in the Cave of Ordeals and the Cave of Shadows in Twilight Princess HD. Ice Keese have an identical behavior to their other variants, but whose bodies are able to freeze Link upon contact. As with all Keese variations, they can be forced onto the ground and stunned whenever Link uses the Shield Attack on them.

Ice Keese in Phantom Hourglass and Spirit Tracks appear as light blue bats with a stream of icy mist trailing behind them. Like other variants, they simply fly in circular and erratic patterns. Touching one will instantly freeze Link, requiring the Stylus to be rubbed on the screen to thaw him out. They can be defeated by most weapons in Link's arsenal, but long-range weapons such as the Bow are recommended to keep Link at a safe distance. They appear in frozen regions. In Spirit Tracks ordinary Keese can fly into a light blue fire turning into Ice Keese.

In Tri Force Heroes, Ice Keese appear in Levels of the Drablands' Ice Cavern region. They resemble blue bats enveloped in mist. Like the other Keese variants in the game, Ice Keese will attack the Links by diving at them from afar. They can only be defeated either with the Fire Gloves or by first stunning them with an item.

Ice Keese appear in Breath of the Wild. They are typically found on icy mountaintops, such as Mount Lanayru. They can potentially drop Ice Keese Wings when defeated. Upon making contact with Link, they will freeze him.

Ice Keese appear as enemies in Cadence of Hyrule where they move to the beat of the music. They share their beat pattern with other Keese, always moving on every two music beats. At first glance, their movement is erratic, but they will always pause on one beat before moving onto an adjacent tile, with their bodies always facing the direction they want to go. For every few beats, their bodies are temporarily engulfed in an icy mist, and if either Cadence, Link, Yves, or Zelda touch or attack them while they're in this state, they will become frozen in a block of ice for several beats. However, the mist will eventually fade away, rendering them vulnerable for a few beats before their bodies become icy cold again in order to repeat the pattern.