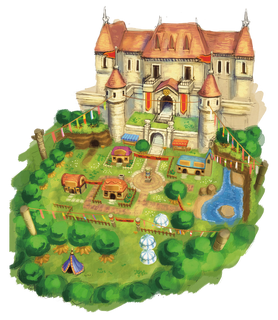 Hytopia is the kingdom that serves as the setting of Tri Force Heroes.[1] It is ruled by King Tuft and his daughter, Princess Styla. It is home to many round eared Humans as they appear to be the predominant race and are called Hytopians. [2] Hytopia is a very fashion-forward kingdom,[3] and a prophecy in the kingdom tells of three heroes who will come together to form a Totem.[4] The kingdom was connected with Hyrule,[5] located to the north of it,[6] during The Era of Light and Dark. However, at a later period, possibly during the Golden Era when the kingdom of Hyrule expanded, the kingdom of Hytopia had seemingly merged with Hyrule.[7][8]

Hytopia is a small city settlement which is situated directly in front of Hytopia Castle. It serves as the main hub world when the Links are not in the Drablands. It is aligned with several town houses, as well as numerous trees and a couple shops: most notably Madame Couture's, where people go to get Outfits tailored by Couture, as well as the Daily Riches shop and the Miiverse Gallery. Once Link has cleared several Levels in the Drablands, the Street Merchant will also arrive and set up a small stall, where he will sell and buy various Materials.[9] Between the castle and the town's main square is a small waterway with a bridge. Link can dive into the water by climbing down a nearby fleet of stairs. Green Rupees can be found hidden beneath the bridge.

In the center of town is a stone statue fountain, known as the Tri Force Hero Statue.[10] This statue, which depicts three heroes forming a Totem and pointing a Sword skyward, is a monument to the Tri Force Heroes, the heroes of legend in the kingdom's prophecy. It is considered customary to give thanks to this statue.[10][11] Doing so allows Link to save his game's progress anytime.

As a small settlement, Hytopia's town is home to only a handful of civilians. As the center place of high fashion, its residents regularly enjoy wearing stylish and unique clothes.[3] After Princess Styla is cursed to wear an irremovable, ugly outfit by Lady Maud, a resulting panic sweeps through the town as its residents turn to wearing ordinary and unusual Outfits out of fear of being cursed as well.[12][13] As a result of the panic, King Tuft begins a search for qualified heroes to hunt down the Drablands witch. A sign near Madame Couture's seeks out wanted heroes, and promises a great reward to anyone who manages to defeat the witch.[14]

Link can leave the town by taking the southern gate, where a Guard keeps watch to ensure that no suspicious people leave. Link can speak with him whenever he wishes to leave town; doing so will save the game's progress and return to the title screen.

Sometime following the lifting of Princess Styla's curse, Hytopia ceased its autonomy, and underwent a merger with Hyrule, becoming the kingdom's northern region. Although Hytopia as its own settlement was no more, the incarnation of Hyrule that existed during The Era of Decline's Quest to Reunite the Triforce was influenced by its legacy. Hytopia's powerful magic users led to many people who could use magic to exist during this generation, and the residents of settlements to the northernmost region of Hyrule were particularly fashionable.[7]

Hytopia may be a portmanteau of "Hy" from Hyrule, in reference to its connection with it, and "utopia," an ideal or perfect place.