This article is about the unit type from the Hyrule Warriors series. For the character from A Link Between Worlds, see Captain.

Hyrulean Captains (also known as Hylian Captains) are captains of the Hyrulean Forces units in Hyrule Warriors and Hyrule Warriors Legends. While they are normally allied units, they also appear as enemies in certain scenarios.

Due to the armor they wear, their exact race is unclear, though their general appearance implies them to be either Hylian and/or Human.

More experienced than the Hyrulean Soldiers they lead, Captains are fight wielding Swords & Holy Hylian Shields. Though their abilities pale in comparison to those possessed by the Hero, Sheikah, and even Princess Zelda, they are still an important part of the Hyrulean Forces. However they are shown to be susceptible to brainwashing, which can cause them to turn on their allies.

Despite their weaknesses, they are dedicated to serving and protecting the Kingdom of Hyrule, engaging its enemies alongside the Hero, General Impa, Princess Zelda, and their allies.

These Hyrulean Captains wear uniforms and armor identical to that worn by the soldiers they lead. The only difference is their rank and that they fight wielding Holy Hylian Shields.

Dark Hylian Captains are a shadow Dark variant that appear as enemies in Adventure Mode. They drop the same materials as Hyrulean Captains.

Ghost Captains are the spirits of fallen Hyrulean Captains that serve as members of the Ghost Forces responsible for defending the Temple of the Sacred Sword. They only drop Hearts, Force Fragments, and Magic Jars when defeated.

Captains of the Knights of Skyloft that wield identical equipment, armor, and weapons as their Hyrulean Forces counterparts. They appear in Land in the Sky and Cia's Tale: The Demon Lord.

Render of a lightly armored Hyrulean Captain from Hyrule Warriors 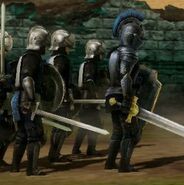 Retrieved from "https://zelda.fandom.com/wiki/Hyrulean_Captain?oldid=542473"
Community content is available under CC-BY-SA unless otherwise noted.