Hyrule Field is the main region of Central Hyrule and is one of the largest regions in Hyrule. Hyrule Castle is located in its northern reaches. One of Link's Recovered Memories can be recalled in Hyrule Field (actually there are three as Lake Kolomo and Hyrule Castle are technically part of Hyrule Field) . Link can meet Hylians at the Outskirt and Serenne Stables in this region, and multiple Koroks can be discovered to obtain Korok Seeds. Guardian Stalkers patrol areas near Hyrule Castle such as the Hyrule Garrison Ruins, Ranch Ruins, Sacred Ground Ruins, and Hyrule Castle Town Ruins. 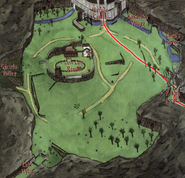 Retrieved from "https://zelda.fandom.com/wiki/Hyrule_Field?oldid=534684"
Community content is available under CC-BY-SA unless otherwise noted.