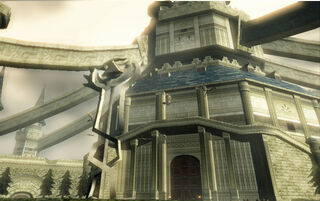 The tower exterior in Twilight Princess

A Link to the Past
Twilight Princess

(TP)
Hyrule Castle Tower is a recurring location in The Legend of Zelda series.[1] It refers to the tower keep of Hyrule Castle. The tower is usually an important location within the castle complex and is often the site of several boss battles.

In A Link to the Past, the Hyrule Castle Tower serves as the lair of the dark wizard Agahnim, after betraying and overthrowing the King of Hyrule. Agahnim later had each of the Seven Maidens brought to his chambers atop the tower to be sent to the Dark World via his dark magic, in order to break the seal that locked away Ganon. The tower has seven floors in total. Its entrance on the castle balcony is at first protected by an evil barrier cast by Agahnim, denying access to the castle's upper levels at the start of the game.

After succeeding in finding and acquiring the Master Sword, Link discovers that Princess Zelda had been captured by the brainwashed Soldiers of Hyrule and taken to the top of Hyrule Castle Tower to be sent to the Dark World as the final Maiden.[2] Link returns to the castle and dispels the tower's barrier using the Master Sword, permitting him entry. After battling his way through the structure while ascending the tower, Link arrives at Agahnim's chamber but arrives just in time to see him send Zelda into the Dark World before retreating. Link follows the evil magician to a hidden room beyond the chamber and eventually defeats him, resulting in Agahnim drawing Link into the Dark World as well.

In Twilight Princess, the Hyrule Castle Tower serves as the throne room of Hyrule, which is located in the citadel perched atop the tower. The citadel can be reached by traversing all the way through the tower to an outside catwalk that leads up to the structure. The tower is visible from almost any point in Hyrule and serves as the location from which Princess Zelda rules the kingdom. Similar to its A Link to the Past incarnation, this version of Hyrule Castle Tower has multiple floors and is located at the heart of the castle, with several smaller structures surrounding it from the perimeter. A stone statue depicting the Golden Goddesses and the Triforce sits above the throne. In this game, the tower makes up the bulk of the castle's main structure in addition to its role as the keep of the complex.

The tower's throne room is first seen within a flashback when Zant, the King of Twilight, invaded Hyrule Castle and forced Princess Zelda to surrender. The tower can be seen again after Princess Zelda revives Midna, when a pyramid of Twilight surrounds the tower and the rest of Hyrule Castle. Link does not actually get to enter and explore the tower until near the end of the game, after Zant has been deposed from the Twilight Realm and the Fused Shadow removed from him. Midna uses the Fused Shadow to destroy the pyramid of Twilight, allowing her and Link to enter the castle and make their way to the tower. The pair obtain the key from King Bulblin that permits entry into the lower levels of the tower.

At the tower's throne room the pair meet Ganondorf, with Zelda's lifeless body hanging in a niche above the throne. Ganondorf then takes possession of the princess's body and attacks as Possessed Zelda, resulting in a battle to free her of his influence. After this is achieved, the Dark Beast Ganon is fought and conquered by Link and Midna, with Zelda's spirit returning to her body shortly thereafter. Though the tower appears to have been destroyed along with the rest of Hyrule Castle following Midna's confrontation with Ganondorf, it is revealed that both the tower and the castle at large have been rebuilt at the end of the game.