Hyrule Castle (A Link to the Past)

It has been suggested that this article or section be merged with Hyrule Castle. 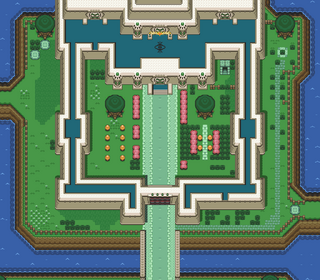 Hyrule Castle guide
at StrategyWiki
Hyrule Castle,[1] also known as the Castle of Hyrule,[2] is a dungeon featured in A Link to the Past. It is visited twice by Link throughout his adventure: first to rescue Princess Zelda from her cell, and later to battle Agahnim before being transported to the Dark World. The main item obtained is the Boomerang.

Entrance to the Castle

After Link is telepathically contacted by Princess Zelda to rescue her from Agahnim's clutches in Hyrule Castle,[3] the young hero uncovers a hidden hole beneath a bush northeast of the castle that leads him into a secret passage.[4] He then finds his uncle has been mortally wounded and receives his sword and shield before passing away.[5]

The castle is overrun by corrupted soldiers who attack Link on sight. The first time Link visits the dungeon, he must traverse the maze-like castle to find Princess Zelda's cell. On his way, he finds the Boomerang, which can be used to stun the castle guards. Guarding Princess Zelda's cell is the Ball and Chain Trooper, whom Link must defeat in order to free Zelda from her prison. Together, they head towards the king's chamber to reveal a path that takes them to the Secret Passage, which eventually leads them into the Sanctuary.

At this point, Agahnim makes the upper levels of the castle inaccessible by creating an electrical barrier that cannot be bypassed. It can only be destroyed once Link retrieves the Master Sword from the Lost Woods. With the sword in hand, he can access the upper area of the castle and destroy the barrier with a single slash from the Blade of Evil's Bane. This area of the castle requires Link to defeat various enemy soldiers in order to reach the top of the castle. Although he can evade some of the foes, some of the rooms will require that Link defeat all the enemies before proceeding. After reaching the top of the castle, Link witnesses Agahnim as he sends Princess Zelda to the Dark World. The young hero must then burn the middle curtain with the use of his Lantern to enter another room and battle against the evil wizard who, upon his defeat, sends Link to the Dark World.