"This is a big, heavy shield just like the ones Hylian Knights use. It can stand up to flame attacks!"
— In-game description

The Hylian Shield (ハイリアの盾, Hairia no Tate?, Hylia Shield) is a recurring shield in the Legend of Zelda series. It is an adult-sized metal heater shield said to be the very same type of shield used by Hylian Knights; though its design varies somewhat between games, one constant is that the Hylian Shield bears the emblem of the Triforce, as well that of a red Loftwing.

After Link is granted passage to Death Mountain by the Keaton Mask Soldier in Kakariko Village, the soldier advises that Link buy a Hylian Shield to protect himself from spontaneous eruptions. If Link buys a shield from the Bazaar after having spoken to the Keaton Mask Soldier, the shopkeeper will give Link a discount, halving its original 80 Rupee selling price. Hylian Shields may also be found in several Treasure Chests throughout Hyrule if Link does not already have a Hylian Shield in his inventory for any reason. If Link already has a shield, these chests will contain five Rupees instead.

Since the shield was designed for use by adults, Link cannot wield the shield properly when he is a child. If used, Link will crouch down, his entire body being protected from attacks due to its sheer size, but cannot move as long as he uses it. In this game, the Hylian Shield is a wooden shield bearing a metal overlay.

Notably, this incarnation of the Hylian Shield features a fourth yellow triangle aside from the Triforce; the significance of this is unknown. This fourth triangle is surrounded with a large theory that there is a fourth piece in the triangle, as the triangle fits directly into the hole in the middle of the Triforce.

Although it is inaccessible within the game, the statue of the Hero of Time in the underwater Hyrule Castle appears to be bearing the Hylian Shield, as Link did in Ocarina of Time.

The Hylian Shield is the most powerful shield Link can obtain. While it still has a shield meter, which is slightly longer than the Fortified Shield, it will never decrease, making the shield indestructible. Unlike the other shields, it is not purchased or obtained through the upgrade system. Instead, it is the prize Link receives for defeating eight consecutive bosses in the Lightning Round, which is run by Lanayru in Lanayru Gorge after Link learns his part of the Song of the Hero. The red bird crest found on the shield is strikingly similar to Link's own Crimson Loftwing; as this is the earliest known chronological appearance of the Hylian Shield, it is possible this element of the design was created with reference to the Crimson Loftwing species.

The Hylian Shield can be found in Turtle Rock. Link can use this shield to guard against magical attacks. The Hylian Shield replaces the Shield in Link's inventory when found. Despite its usefulness for defense against magic, it is not necessary to complete the game. Due to it being irreplaceable, it cannot be eaten by Like Likes.

"A shield passed down through the Hyrulean royal family, along with the legend of the hero who wielded it. It's defensive capabilities and durability outshine all other shields."
— Hyrule Compendium

The Hylian Shield is found in Hyrule Castle Lockup guarded by a Stalnox. A nearby Stone Tablet reads "-Test of the Royal Guard- Strike down the giant foe to become recognized as a knight of the kingdom." Defeating the Stalnox will cause a Treasure Chest containing the shield to appear.

It is described as a shield passed down through the Royal Family of Hyrule along with the legend of the hero who wielded it, implying it was once wielded by a previous incarnation of Link. The Hylian Shields' design is identical to the one from Skyward Sword. Unlike the Master Sword, the Hylian Shield is breakable. It can withstand twenty-seven Guardian's laser shots before breaking and has a defensive power of 90, making it the strongest and most durable shield that can be obtained.

The Hylian Shield can also be bought from Granté for 3,000 Rupees at the Rare Armor Shop in Tarrey Town after finishing the side quest "From the Ground Up" though only after the Hylian Shield in Hyrule Castle Lockup is obtained and after it's lost or destroyed. Due to its durability and the ability to purchase replacements, the Hylian Shield is ideal for both shield surfing and combat.

Paired with the Master Sword, these can be seen as Link's signature armaments as a Champion, due to them being the ideal equipment for Link's combat style. This is also supported by how both pieces can be restored, with the former recovering on its own, and the shield having replacements obtained through Granté once the aforementioned side quest is completed.

The Hylian Shield is paired with the Master Sword in Link's Master Sword moveset. One of the Materials dropped by Hylian Captains is called a Holy Hylian Shield, which is based on the large silver shields wielded by high-ranking soldiers in the Hyrulean Forces. 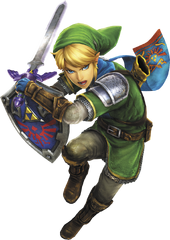 Together with the Master Sword, the Hylian Shield is part of Link's default weapon set. It is also present with most of Link's other weapon choices.

A Hylian Shield appears on the side of the Master Cycle, a vehicle available via DLC Pack 1.

In Bayonetta 2 and the Wii U version of Bayonetta, the titular character can equip the Hylian Shield when wearing the Hero of Hyrule costume set. The Hylian Shield can be used to parry enemy attacks even if Bayonetta does not have the accessory that would normally allow her to do so. 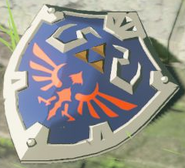 The Hylian Shield on the ground in Breath of the Wild 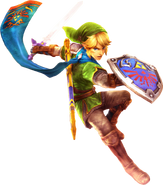 Retrieved from "https://zelda.fandom.com/wiki/Hylian_Shield?oldid=533301"
Community content is available under CC-BY-SA unless otherwise noted.