This article is about the Race. For the language, see Hylian (Language). 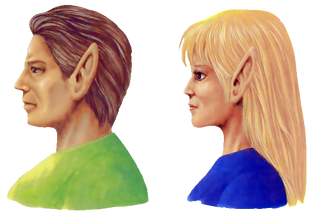 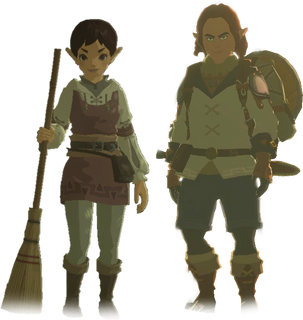 The Hylians (pronounced /ˈhaɪ.li.ən/ HY-lee-ən)[citation needed] are a recurring race of Humans in The Legend of Zelda series.[1][2][3][note 1] They are from the countries of Skyloft, Hyrule and the latter's flooded counterpart, the Great Sea. While it is unlikely that the people of Termina, a parallel world to the Kingdom of Hyrule, are also known as Hylians, they are their parallels. Descended from the people who lived among the goddess Hylia long prior to the establishment of Hyrule as a kingdom, they are a magic race with pointed ears. In the past, Hylians were able to wield magic of considerable might, but, over time, that ability has faded. However, because they are of Hylia's bloodline, the royal family, especially its princesses, are still strong in magic. In addition, some sages and shrine maidens have also been able to wield magic, an ability that brought them considerable honor in Hylian society.[5] The most famous Hylians are the many heroes and princesses that share the same name as one another, the latter being of blood relation and naming tradition. Hylians have the same life expectancy as regular humans.[6]

Hylians were the first race to establish organized civilization in ancient Hyrule[5] many years after the events of Skyward Sword upon the world formerly known only as the Surface. In Twilight Princess, the Oocca are said to have aided them.[7] Unlike several other races in the series, Hylians tend to live in highly populated towns or villages such as Hyrule Castle Town, Kakariko Village and Village of the Blue Maiden. Among the Hylians, there are a variety of peoples of different cultures and ethnicities.[8] Some Hylians have evolved into different races, such as the Wind Tribe or the Kokiri.[9]

When the homeland of the Hylians was under a massive assault by demonic hordes, they were separated from the Surface for thousands of years by Hylia in an attempt to protect them. Living above the clouds on a separate outcrop of earth, they named the safe haven Skyloft. In the sky, the new society flourished in peace and the majority of the Skyloft populace remained ignorant of the ravaged world below the clouds until the events of Skyward Sword. It can be assumed that a portion of Skyloft's population flew down and repopulated the Surface after the events in Skyward Sword, leading to the Hylian establishment of the Kingdom of Hyrule seen in future games.[10]

The most prominent and major home of the Hylians is the iconic Kingdom of Hyrule, formerly the nameless Surface. It is where the ancestors of the Hylians, the people who lived among the goddess Hylia, resided during the Era of the Goddess Hylia. Living among Her Grace in the unnamed land, they had magical powers that passed down to their descendants. When a massive war broke out across the Surface and the goddess took up battle with the demon king Demise, she sent the human survivors into the sky on the outcrop of earth that became known as Skyloft. It is not until after they rediscover the Surface thousands of years later that the Kingdom of Hyrule is established by Hylia's descendants and becomes the home of the Hylian race once more. Hyrule faces several subsequent invasions, namely at the hands of Ganon, an incarnation of Demise's hatred.[11] The Hylians are able to suppress these attacks through their military; their legendary hero, Link; and, occasionally, divine intervention. However, the events of The Wind Waker spell an end to Hyrule in the Adult Timeline.[12] Sunk beneath the Great Sea, ancient Hyrule is lost forevermore in that branch of the timeline.[13] Following its destruction, Tetra and the Hero of Winds travel to another continent and establish New Hyrule.[14][15]

Hyrule Castle appears in several incarnations and is the home of the Hylian monarch.
Hyrule Castle Town is the capital of Hyrule and the main settlement of the Hylian people. It is never seen too far a distance from the castle.
Kakariko Village is the former home of the Sheikah tribe, but eventually was opened up to the Hylian race to make residence.
Village of the Blue Maiden is home to numerous Hylians.
Lon Lon Ranch is home to the Hylians known as Malon, Talon and Ingo, who provide much of the kingdom's source of milk and farming.

The Hylians inhabiting the Great Sea are spread out onto several islands, but live most prominently on the islands Outset Island and Windfall Island. They appear to be more advanced in the use of technology, including the Pictobox and the use of submarines.

Hylians traditionally have pointed ears, and generally have blue or blue-grey eyes and light skin, although the ethnicity as a whole has a wide degree of variation. The lower classes usually wear casual clothing; Hylian males tend to wear belted leather jerkins, and females wear long gowns in many different colors;[16] Hyrulean symbols are often part of the embroidery in their dresses. Tall buns are common in women, while men of the working class usually wear broad-brimmed hats in order to protect their skin from the sun and the rain.[16] Some men also wear knee-length leather boots.[16]

It has been observed that the higher classes including royalty wear complex and luxurious jewelry including precious metals and gemstones such as gold and rubies.

Hylians have a medieval theme to them which fits to the medieval setting of the series, especially in the case of earlier games. Many architectural elements seen in the series greatly resemble architecture from the medieval times. Clothing styles vary but are mainly consistent with the overall medieval theme. Unlike most other races, Hylians are a predominantly urban race. This, however, by no means suggests that Hylians are not seen elsewhere, as many people seen living on farms and other comparable non-urban locations have been Hylian. Hylians are shown to have ranging professions, varying from farmers to merchants and bartenders. In addition, Hylians are known to be highly superstitious, having a rich mythology and many legends. Hylians are a very populous race and can be found all over Kingdom of Hyrule, however the majority will tend to live together in grand settlements, such as Hyrule Castle Town.

One of the few known abilities that the Hylian people possess is the use of their pointed ears to receive special messages from the gods themselves.[17] This also includes the ability to send telepathic messages to other Hylians across time and space. This is an ability that continues to get passed unto their children, their children's children and so on.[16] Sahasrahla and an incarnation of Princess Zelda display this particular ability in A Link to the Past, the former being able to communicate to Link across even the void between dimensions to assist the young hero in his quest.