Zelda Wiki
Register
Don't have an account?
Sign In
Advertisement
in: Deities, Characters, Characters in Skyward Sword,
and 3 more
English

This article is about the Goddess. For other uses, see Hylia (Disambiguation). 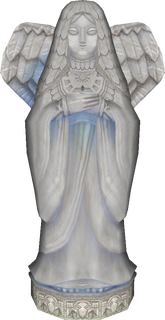 A Statue depicting the goddess Hylia

Skyward Sword (Himekawa)
Hylia (pronounced /ˈhaɪliə/ HY-lee-ə)[3][4],[5] also known as The Goddess,[6] is a major deity in the Legend of Zelda series, primarily featured in Skyward Sword and Breath of the Wild. Beginning as a divine entity, she was later reborn into a mortal form as the first incarnation of Zelda, making her the true ancestor to the Royal Family of Hyrule.

After the Golden Goddesses created the world, they departed and entrusted the protection of it as well as the Triforce to Hylia, a duty she held throughout the Era of Hylia.[7][8] Eventually, Hylia met a person who she chose to be her hero, giving a Sailcloth to him.[9]

The Battle Against Demise

One day, the Demon King Demise and his demonic hordes suddenly appeared from a fissure that had opened from the ground. Wanting to make the world his own, Demise gathered an army of monsters and attacked the Surface, with the goal of seizing the Triforce from Hylia and claiming it for himself.[10][11] To protect her people, Hylia gathered the surviving humans on an outcrop of earth, which would later come to be known as Skyloft, and sent them to the sky away from danger.[12] To prevent the Triforce from falling into Demise's hands, the relic was hidden within Skyloft's Sky Keep, but its location was kept a secret.[13] Finally, Hylia created a cloud barrier to separate the sky from the world below.[14] With the surviving humans safe above the clouds, Hylia and five tribes, made from various species who still remained on the surface, battled Demise with the Goddess Sword as her weapon, and eventually sealed him away in the former location of the Statue of the Goddess, which came to be known as the Sealed Grounds.[15]

While peace had been restored to the land, Hylia suffered grave injuries during the battle and knew that the seal would not hold against Demise's power forever. To combat this, the goddess formed two plans to prepare for the Demon King's inevitable return.[6][16] Her first plan was to create Fi, a spirit that would reside in the Goddess Sword, and giving it the purpose of assisting a chosen hero throughout his journey in a future.[2] Her second plan was to willingly shed her divinity and power in order to transfer her soul to the body of a mortal so that she could use the power of Triforce, which could not be used by the gods as a precaution, when the time came.[17]

Before giving up her divinity, Hylia left several messages for the one who would one day become her chosen hero to guide him in his quest.[18][19][20] Along with these messages, She created several trials that would test the hero's power, wisdom, and courage,[21] and left gifts to help the hero find his way to the Sacred Flames to empower the Goddess Sword into the Master Sword.[22] The goddess also created the Isle of Songs,[23] which housed three melodies that would open the way to each of these trials. Additionally, she left behind the Goddess's Harp,[24] which would be used by her mortal incarnation as well as the hero later.

The goddess also appointed three dragons to protect the regions of the Surface: Faron to watch over Faron Woods, Eldin to watch over Eldin Volcano, and Lanayru to watch over Lanayru Desert;[25] she also appointed the spirit Levias as warden of the skies.[26] Each of the guardians were left with a part of the Song of the Hero, a melody that would unlock the hero's final trial.[13][27] Hylia entrusted the guardians to teach the chosen hero their part of the song, since should the hero succeed in completing the last trial, the path to the Triforce would open to him.[28] 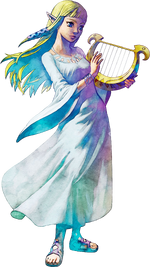 Centuries later during the Sky Era, Hylia was reborn on Skyloft as a Hylian girl named Zelda, daughter of Gaepora and close childhood friend of Link, who would go on to become the Hero of the Sky. However, Zelda had no memory of her previous existence as Hylia, nor was she aware of her true nature. One day while flying with Link, she was tossed out of the sky onto the Surface by a massive tornado summoned by the Demon Lord, Ghirahim. She was found by an old woman who rescued her from being captured by evil forces and helped her remember her previous life as the goddess Hylia and her original purpose.[29] With the help of Impa, who was sent out to help Zelda at the request of the goddess,[30] Zelda set out to pray at the goddess statues located in each temple across the surface to purify her body, with each statue stirring up memories of her past life.[29]

Zelda and Impa traveled to the Temple of Time and went through the Gate of Time a thousand years into the past, but not before giving Link the Goddess's Harp. To prevent Ghirahim, who wished to use Zelda's soul to resurrect his master, from following them, Impa destroyed the Gate of Time. They arrived at a time very shortly after the battle with Demise had ended; Zelda eventually made her way to the Temple of Hylia, which would come to be known as the Sealed Temple in the present, where she and Impa awaited Link's arrival. Link later found and activated a second Gate of Time at the Sealed Temple and met Zelda in the past. She explained to him her true nature as the mortal reincarnation of the Goddess Hylia, and blessed the Master Sword with the power of the Goddess.[31]

However, as the living embodiment of Hylia, Zelda had to remain in the past to ensure that Demise remained imprisoned within his seal.[32] She apologized to Link for involving him in the war against Demise, explaining that Hylia needed someone with an "unbreakable spirit" and that she took advantage of Link's motivation to save Zelda.[33] Despite not being aware of the plan at all, Zelda still felt remorseful as the goddess's incarnation and felt she had to atone.[34] She proceeded to seal herself into an amber crystal and slept for a thousand years to ensure Demise's imprisonment held, but not before telling Link that he must use the Triforce to destroy Demise so that she will be able to reawaken.[35]

After Link used the Triforce to destroy Demise, Zelda awakens from her slumber and the two are finally reunited.[36] Just as it was believed that Link's quest is finally over however, Ghirahim attacked and took Zelda through the Gate of Time so he could free Demise there, as he had now perished in the present.[37][38] Link followed the Demon Lord as he began the ritual to revive Demise. He ordered his troops to attack Link to keep the hero at bay while he worked, but the Hero of the Sky managed to reach Ghirahim and defeated him. However, the ritual had continued during the fight and the Imprisoned rises, absorbing Zelda's soul and returning to his original form: the Demon King, Demise.[39]

During the battle between Link and Demise, Zelda was kept safe within the Sealed Temple. After Link successfully defeated and sealed Demise's consciousness within the Master Sword, Zelda's soul returns to her and she recovers. Peace returned to the land, and Zelda as well as the young hero returned to their own time. Later while enjoying the view from atop the Goddess Statue, Zelda mentioned to Link that she had fantasized about the surface for so long. She decides that she wants to live there permanently and watch over the Triforce, and asks Link if he would like to do the same.[40]

For her selfless acts to protect the Hylians who bear her name, Hylia is among the most praised and beloved deities in all of Hyrule.[41] The descendants of her mortal incarnation would go on to establish the Kingdom of Hyrule upon the surface in the Era of Prosperity, their bloodline becoming the long-lasting Royal Family of Hyrule. It eventually became traditional for future women born into the royal bloodline to be named "Zelda" after her mortal embodiment for generations, while many locations including Lake Hylia, the Hylia River, and Mount Hylia would be named after the goddess herself.

Hylia has a great presence in Breath of the Wild's Hyrule. There are a multitude of statues and monuments to Hylia across the continent, and several locations are named after her such as Mount Hylia. The Monks that created the Ancient Shrines also seem to worship her and claim to have been blessed with her sight.[42][43]

In the Skyward Sword manga by Akira Himekawa, the Goddess Hylia makes an appearance.

As Hylia's Chosen Hero is readying himself to battle against Demise and his army, the Goddess Hylia suddenly appears in person, riding on an old Loftwing. Link reveals himself as the Knight of Hylia and the hero whom they sought. He claims that, although humans may seem small in the eyes of the gods, there are those among them who possess great courage.[44][45] Hylia acknowledges her knight's unmatched valiance and honor and proclaims him her chosen hero. She then allows him to wield her legendary weapon brought by the gods, the Master Sword.[46] However, the hero claims that he could not touch a holy sword, thinking that he is impure because he was imprisoned for years.[47] Despite this, Hylia says that the Master Sword will decide whether he is impure or not, and asks him for his choice; to seek revenge on the surface's people who imprisoned him or to save the world from its terrible fate.[48][49] Hylia's Chosen Hero decides that he will always stand with his friends and accepts the Master Sword from the goddess.[50] After reforging the sword, the hero agrees to lead the Goddess's army against the invading demons, but is mortally wounded in an encounter with Demise. With no other choice, Hylia and the hero use the power of the Master Sword to send the earth surrounding the castle into The Sky.[51] With the humans and the Triforce safe in The Sky, Hylia proceeds to fight Demise and seals him away. After the battle, she sees her Chosen Hero lying dead on the ground, having succumbed to his wounds. Filled with grief, Hylia promises that his spirit will eternally live on and resolves to discard her divinity so that she may be with the Chosen Hero as a mortal.[52]