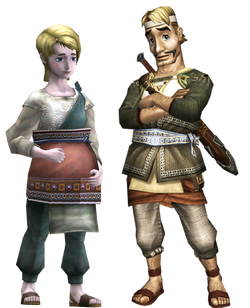 A female and male Human from Twilight Princess

Round ears
Humans,(MM | TP)[1][2] also known as Human Beings,(PH)[3] are both a species and a non specific recurring race in the The Legend of Zelda series. Humans go unnamed in A Link to the Past, Link's Awakening, Oracle of Seasons, Oracle of Ages, The Wind Waker, The Minish Cap, and Tri Force Heroes.

Unlike Hylians, who are more prolific and possess wide, pointed ears, Humans have rounded ears and are much less commonly seen in the series. The term Human is occasionally used to refer to Hylians[4] and is frequently employed as an umbrella term for multiple humanoid races.[5]

Humans are seldom seen in The Legend of Zelda series, as Hylians and other humanoid races dominate the land of Hyrule. Round-eared Humans, however, do occasionally appear and seem to thrive in lands that exist outside of Hyrule, including Koholint Island, Labrynna, Holodrum, certain islands in the Great Sea and World of the Ocean King, the Ordona Province, and Hytopia.

The Gerudo are another race of humans who generally possess round ears,[6] but are otherwise distinct from ordinary Humans.

On Zelda Wiki, characters whose ears are obscured are assumed to be Humans.

Humans are for the most part identical to Hylians, with the sole exception being their small, rounded ears in contrast to the Hylians' pointed ears. As it is often said that the Hylians' long ears allow them to hear the voice of the gods,[7] it can be assumed that Humans do not possess this same ability. The origins of Humans and their relationship to Hylians is never quite elaborated in the series, and indeed, round-eared Humans are never given any specific name in the games. Humans are also capable of learning magic, as shown by Maple.

Humans are seldom seen in contrast to the more prolific, dominating Hylian race. Nonetheless, round-eared Humans do still occasionally appear across the series, and are often especially populous in lands in outer Hyrule. Labrynna, Holodrum, Ordon Village, and Hytopia are notable places whose populations consist almost entirely of round-eared Humans. In fact, round ears are so commonplace to Hytopia that pointed ears are seen as something of a rarity,[8] enough to be one of the prerequisites for being a Tri Force Hero of legend.[9]

Round-eared Humans first made their appearance in Link's Awakening, in which all of the people living on Koholint Island have round ears, making Link the only Hylian to reside on the island during his stay. They mostly live in Mabe Village, but several others also live in remote houses across the isle. Tarin is a notable Human in this game, whose round ears are clearly visible in his artwork.

Humans predominately live in Labrynna of Oracle of Ages and Holodrum of Oracle of Seasons. Nearly the entire population of these lands consist of round-ears Humans, with only the three Oracles as the sole residents with pointed ears. Interestingly, a number of characters who were Hylians in other games now appear as Humans with round ears; including the Happy Mask Salesman, the Head Carpenter and his assistants, Mamamu Yan and the Postman of Labrynna, and Guru-Guru, Malon, Talon and Ingo of Holodrum.

In Twilight Princess, Humans predominately live in the autonomous Ordona Province, which is said to not be a part of Hyrule proper.[10][11] Link is the only Hylian to live in the village. While Humans are most populous to the Ordona Province, a couple of round-eared Humans also live within the kingdom of Hyrule, including Ashei of the Resistance, Barnes of Kakariko Village, Hena and Iza of Zora's River, and their brother Coro living in the Faron Woods.

In Tri Force Heroes, the kingdom of Hytopia is entirely inhabited by round-eared Humans; no Hylians or other races live as residents in the state. This fact is pointed out by many of the inhabitants,[12] as notably demonstrated when the populace reacts with surprise to Link's pointed ears or regards them as fashionable.[8] Round ears are so common to Hytopia that pointed ears are even regarded as one of the prerequisites for being a Tri Force Hero.[9]

In Freshly-Picked Tingle's Rosy Rupeeland, Tingle was originally a Human before meeting Uncle Rupee and turned into a Tingle with the promise of going to Rupeeland, giving him his pointed ears and distinctive green suit. Rupeeland is also predominately home to round-eared Humans as well; only a very few Hylians live in this land.

In Ripened Tingle's Balloon Trip of Love, a couple round-eared Humans are encountered in the story book world. They include Tingle's Parents, Peter, and Nimi Baron.

Races in The Legend of Zelda series
Community content is available under GNU Free Documentation License unless otherwise noted.
Advertisement