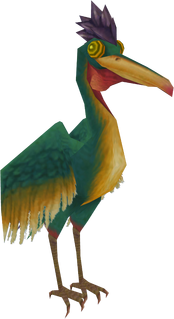 Hroks are large birds that reside in the Lanayru Desert, spending their day roosting atop many of the region's dead trees. They ingest rocks to absorb their minerals for nutrition, but they cannot fully digest the small stones they eat, and regurgitate them as large boulders to attack.[2] They will attack Link in this way once they spot him entering their territory. They fly high above Link, making them entirely out of reach to his Sword. The territory of Hroks covers a large distance, and they will continue to pursue Link even when he is far past their nest.

Link can avoid their attacks by ensuring he is never directly below the airborne Hrok's shadow. To defeat a Hrok, Link may use his Beetle to drop a Bomb on an unsuspecting Hrok while it is roosting in its tree. Once he obtains the Bow, he can also shoot them down with one shot. Hroks will always drop a Red Rupee when defeated.

Hrok is likely derived from the Roc, a mythical bird of enormous size and strength.