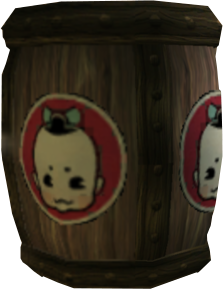 Hot Spring Water can be found in various locations in Majora's Mask. In the Mountain Village of Snowhead, Hot Spring Water appears in the Goron Graveyard after pushing Darmani III's tombstone as Goron Link to allow the Water to flow into the chamber.[3] It can also be found in a Grotto on the Road to Goron Village and Beneath the Well in a chamber with a Dexihand. After being bottled for a while, the Water will cool and become Spring Water.[4][5]

Hot Springwater can be taken directly from the Hot Springs in Death Mountain or in Kakariko Village in Twilight Princess. It is full of nutrients and drinking it will replenish all Hearts.[6][7] Hot Springwater cools within three minutes, turning into normal Water while losing its health-restoring properties.[8]

A shop in Hyrule Castle Town run by a Goron and his son supplies Hot Springwater from Death Mountain.[9] However, since the bridge leading to the Eldin Province was destroyed, they are unable to get a supply of Water to the shop.[10] Even after the bridge is repaired by Malo Mart's fund-raising efforts, one of the Gorons sits by the bridge, saying he is too tired to retrieve Water from the mountain. He then mentions that being doused with some Springwater would give him the energy he needs.[11] If talked to, Gor Liggs in Kakariko Village gives Link a Barrel full of Hot Springwater which he must safely carry through Hyrule Field to Hyrule Castle Town and throw on top of the tired Goron.[12] After being revitalized by the Water, the Goron is able to restock his shop with Hot Springwater, giving Link a free sample as thanks.

Once the Goron's shop has been stocked, Hot Springwater can be given to the Goron just south of Town, who says he can break through a rock wall blocking the path to southern Hyrule Field if he could have some of the Water for an energy boost.[13] Once he has received the Water, he is able to break the wall in a day by rolling into it, thus opening the path.

Hot Spring Water appears as a Drink-type Food in Hyrule Warriors Legends. It is imbued with the Fire Element. When consumed by a Companion Fairy in the Dining Room of the My Fairy mode, Hot Spring Water can increase the Fairy's Trust level and personality traits.