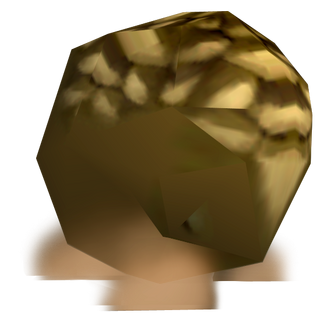 Hot Rodder Goron is a large, continuously rolling member of the Goron race in Ocarina of Time.[1]

Hot Rodder Goron makes his home on the second floor of the Goron City, rolling lap after circular lap across the expanse of the city's circular flooring design. With no described purpose, this Goron will continue to roll until Link places a well-timed Bomb in his path at the alcove near the sign. When hit by the Bomb's explosion, Hot Rodder Goron will rise and award Link's "courage" with a bigger Bomb Bag. If startled by a bomb elsewhere, he will talk to Link for a moment before continuing on his way; he will only reward the Bomb Bag if startled by the alcove on the second floor.

Meeting and stopping Hot Rodder Goron is not significant to the plot line of Ocarina of Time, as Link can complete the game with the smallest Bomb Bag. Furthermore, regardless if Link stops him or not, Hot Rodder Goron will continue to roll in Goron City, as long as the child stage of Link is apparent. Hot Rodder Goron disappears in the age of Adult Link, replaced by a smaller, yet still rolling, Goron named Link, interestingly.