Horsehead (マズラ, Mazura?) is the boss of Parapa Palace, the first dungeon in Zelda II: The Adventure of Link. True to its name, its head is that of a white horse, and it otherwise appears as a large knight in red armor. It wields a two-handed mace in battle, and its only weak point is its characteristic head. In the Playing to Power guide for the game, it is given its Japanese name of Mazura, and was claimed to have upheld its duty of guarding the statue at Parapa Palace since times long past.

A lesser enemy of similar appearance, the Tinsuit, is often mistakenly described as a "mini-horsehead."

In the Famicom Disk System version, Horsehead reappeared as a mini-boss for the Ocean Palace in a certain room with a false wall. Like in the earlier fight, he provides Link with a key upon being defeated that was to be used in the room beyond the false wall. In the NES version, he was replaced with a Blue Iron Knuckle and had the key and locked door removed.

Horsehead deals a lot of damage and knocks Link far with his mace. Damage can be reduced, however, using the Shield Spell. His head is his weak spot and there are two main ways to defeat him. The best method of damaging him is to either wait until he comes close to Link and attacks, then jump over the attack and strike his head or stand at a distance from him and wait until he attacks before jumping towards him and attacking. Another, and the best method, is to get the Downthrust first, then hit from above. 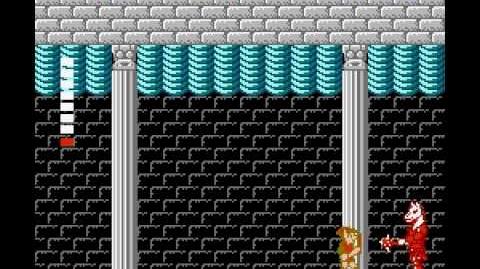 Artwork of Link confronting Horsehead
Add a photo to this gallery
Retrieved from "https://zelda.fandom.com/wiki/Horsehead?oldid=535779"
Community content is available under CC-BY-SA unless otherwise noted.