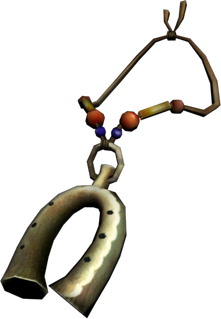 The Horse Call was made by Ilia as a gift to Link for his journey from Ordon Village to Hyrule Castle.[3] Before Link is able to depart, however, a group of Bulblin raiders appear and capture Ilia and several of the other Ordon children. Eventually, Ilia is found under the care of Telma in the Castle Town, though suffering from memory loss. In a quest to restore her memory, Link recovers the Horse Call from Impaz in the Hidden Village, where Ilia had been held captive. After presenting it to Ilia, she regains her lost memories and is finally able to give Link his gift.

The Horse Call is used to play "Epona's Song" to summon Epona anywhere in Hyrule Field. It also eliminates the need for Link to locate patches of Horse Grass.

In Super Smash Bros. Brawl, the Horse Call appears as a Sticker.